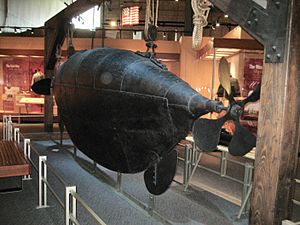 On display at the Louisiana State Museum, Baton Rouge, 2008

The Bayou St. John Confederate Submarine is an early military submarine built for use by the Confederate States of America during the American Civil War.

No period documentation for the submarine is known to exist, and its original name and many details about it remain unknown. The submarine was rediscovered in 1878 during dredging of Bayou St. John where it joins Lake Pontchartrain in New Orleans, Louisiana, where the submarine was presumably scuttled to prevent it falling into Union hands after the capture of New Orleans (see also: New Orleans in the American Civil War). It was put on display beside the Bayou at Spanish Fort Amusement Park as a curiosity, incorrectly identified as the Confederate submarine Pioneer.

The traditional identification as the Pioneer was not questioned seriously until historical research in the late 20th century showed the Pioneer to be of a different design than the one retrieved from Bayou St. John. The Bayou submarine and the Pioneer may have undergone trials at about the same time, and confusion of the two may date back to contemporary accounts; it is not clear which one was constructed first.

In 1908 the submarine was moved to the grounds of Camp Nicholls Confederate Home on Moss Street, beside Bayou St. John. About this time, the interior of the submarine was filled with concrete in an attempt at preservation that later generations of conservators found questionable.

In 1942 the submarine was acquired by the Louisiana State Museum and moved to Jackson Square. After being in various displays around the Square it was placed in the shelter of the arcade on the ground floor of the Presbytere in 1957, where it would remain until 1999.

All content from Kiddle encyclopedia articles (including the article images and facts) can be freely used under Attribution-ShareAlike license, unless stated otherwise. Cite this article:
Bayou St. John submarine Facts for Kids. Kiddle Encyclopedia.