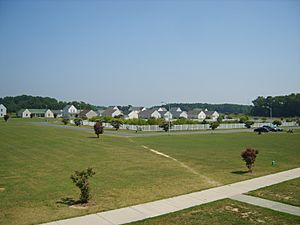 One side of the Bayview Community

Bayview is an over-300-year-old predominately African American community located on the Eastern Shore of Virginia. It is a community rich in culture and tradition. After the American Civil War it became a community populated by freed slaves, principally consisting of farms and a small village with shops, restaurants, and its own post office. In the 20th century Bayview thrived due to agriculture, especially the growing of white potatoes, and the growth of the local seafood industry. In the late 20th century Bayview was hit hard when many of the canneries and seafood processing plants closed due to dwindling shellfish populations in the Chesapeake Bay as a result of increased pollution.

In 1994 the state of Virginia proposed to build a maximum-security prison on the edge of the community. At this time 90% of Bayview residents lived in substandard housing, with 85% having no indoor plumbing. Members of the community rallied and joined together with outside forces, ultimately defeating the prison in the spring of 1995. In 1998 the community organized as the Bayview Citizens for Social Justice and began forming productive partnerships, including the Nature Conservancy, to improve the standard of living for its people. Through a combination of federal, state, and private funds the community was able to raise $11 million and purchase 160 acres of farmland, including the proposed site for the prison. In the first phase they built 48 one, two, and three bedroom apartments, 22 single-family homes, a laundry facility, a Community Enrichment Center, and several other facilities. Currently the Bayview community is on the rise and is working towards the next phase of development.

Bayview is composed of approximately 200 people, 125 of which are over the age of 18. Their community is predominately African American, but in recent years there has been an increasing number of White and Hispanic people.

Although Bayview has increased their living standards, there are still many problems, especially in the areas of education and income. No male has graduated or even attended college, while only 7 out of 125 adults have earned a college degree. Less than half (49.6%) have received a high school degree.

Poor graduation rates are certainly a part of the explanation of why Bayview remains one of the poorest communities in the United States. Yearly income for a Bayview family ranges from under $10,000 to $40,000. 83% of the population makes less than $10,000 a year, which is below the United States' poverty line. This fact may seem small but with only a population of 125 people over the age of 18 that equates to 104 people. As of September 1, 2012, no individual makes over $40,000 per year. 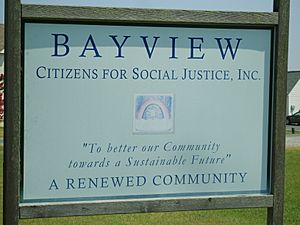 Bayview Citizens for Social Justice, Inc. (BCSJ) is a 501(c)(3) organization whose mission is to eliminate poverty by improving the living conditions of its citizens and to properly educate, unite, and empower the residents of Bayview, Va. BCSJ was formed in 1998 after the victorious fight to prevent the construction of a proposed maximum-security prison.

The community works to bring together citizens for cultural and religious celebrations such as Black History Month, Easter, and Christmas. BCSJ also works to improve the living qualities and improve the self-sufficiency of Bayview’s citizens. Examples include community housing, homebuyers’ education, and voter registration.

The BCSJ received and applied for a capacity building grant from a National Housing Assistance Council (HAC) which has produced and extended board training in Financial Management and Loan Packaging. The management and maintenance of this grant is used on programs such as, BCSJ Water and Sewer Program, Lease-to-Purchase HOME Program and the Shared Properties, Developed Lots, Street Lights, Storm-water retention pond and Community Farm program.

Each year a private firm is hired to conduct a SWOT survey for BCSJ.

A strength outlined in particular was Bayview’s outstanding land control, with 150 acres of buildable lots and community farmland. BCSJ has worked to develop a Master Plan for new housing, childcare, and a community center and currently owns community buildings for public meetings, workshops, and gatherings. Members in the community demonstrate the powers of Productive Partnerships, Coalitions, and Networking. Previous and current partnerships include NAACP, the Nature Conservancy, the United States Department of Housing and Urban Development (HUD), Old Dominion University, and the Citizens for a Better Eastern Shore. With the help of community leaders who persevere with strong resilience, extensive work has been done to garner media attention, exposure and support. Nevertheless, the community struggles with a lack of professional skills, including financial management, property management, asset management and a lack of supportive legal advisors. Citizens suffer from and work to improve a silent allowance for employment exploitation, social and environmental injustice and loss of major local businesses. BCSJ hopes to maximize their strengths and power of influence for political favor, motivation and encourage participation and promote leadership. Job training, writing skills, and neighborhood protection can help improve conditions.

Close to Bayview is a tourist attraction area with camping, golfing, bird-watching, fishing, retirement living, etc. The location brings difficulty as a peninsular toll bridge to the metropolitan mainland and Virginia Beach is difficult to pay for the many low-to-moderate income families living in Bayview. The separation between the affluent beach community and Bayview also provides a stigma and segregation, as predominately African American, low income families are just two miles from gated waterfront communities, leading to gentrification. BCSJ seeks to move beyond these difficulties through exploring new trends in local attractions through trails, biking, birdwatching, retirement, etc.

Alice Coles – Alice Coles is the most outspoken member of BCSJ and is its Executive Director. Her leadership led to Bayview’s positive redevelopment into a strong community of people with a lifetime commitment to better living. A descendent of freed slaves, Coles was raised in a tradition of strong ties to one’s history and community. One of her initial leadership experiences was running Bayview’s black chapel. In 1994, the state of Virginia planned a maximum-security prison less than a mile from the neighborhood school. With only a high school education and with a job handpicking meat out of crabs, Coles decided to educate herself about the Department of Corrections and travel to Richmond, VA to fight against the proposal. "We decided to fight it," Coles recalls, "because we didn't have anywhere to go and we didn't have anything to lose.". Coles’ hard work paid off as she was able to defeat the proposal for the prison, but her desire for community improvement did not end there. For the next 14 years, Coles organized a national media campaign to advance her community and called on the National Association for the Advancement of Colored People (NAACP) and the Nature Conservancy. BCSJ raised over 11 million dollars to purchase the prison site (104 acres) and 54 additional acres, and built a new village of mixed housing and infrastructure. This construction gave many Bayview citizens new amenities (such as central heating and indoor plumbing) that they thought were part of someone else’s life. There is still work to do in Bayview and Coles will keep fighting. “And if I couldn't be the door that opened, you know, to a better life, I'll be the hinge to hold the door. So, one person can make a difference. Yes.”

Niketa A. Coles – The daughter of Alice Coles, Niketa spent her entire life in Bayview. She attended Eastern Shore Community College and obtained a certificate in Long Term Care Assistant. She has also served as a volunteer for AmeriCorps VISTA. She served as the first secretary for BCSJ from May 1998 to May 2009. In May 2009, she was elected president of BCSJ. Since then, she has facilitated team meetings with owners, funders, representatives, contractors, engineers, and architects. She has also supervised a federal grant of $400,000. She has traveled to Seattle, Colorado, and Washington to gain experience in a wide array of fields: marketing, community development, administration and lobbying. Coles has a strong belief in the promise of the Bayview community, believing that their grass-roots campaign will improve the quality of life for all of Bayview’s citizens.

Cozzie Lockwood – The cousin of Alice Coles, Cozzie served as the 1st president of BCSJ and focused on the importance of the community in inspiring change.

Maurice Cox is a community designer and professor at the University of Virginia School of Architecture. From 1996 to 2006, Cox was a founding partner of the firm RBGC Architecture, Research, and Urbanism. This firm helped design the New Rural Village plan for Bayview and was featured on CBS’ 60 Minutes and in the VCU documentary “This Black Soil.”

Adebola Ajayi is the former Deputy Director of Bayview Citizens for Social Justice. Prior to coming to the United States, Ajayi was the founder of a property planning and development firm registered and based in Nigeria. In the United States, he was a Loan Officer and the staff person responsible for the Housing Assistance Council loans in the Southeast with a portfolio of over 6 million dollars. A registered architect since 1979, Ajayi has a broad knowledge of building low-income housing. He assisted in the development of Bayview’s New Rural Village. In its initial phase in the early 2000s, Bayview wanted to build 32 units, but with Ajayi’s help they were able to expand it to 52 units.

Alice Coles and Bayview have been featured on 60 Minutes, NPR, Voice of America, and in a VCU documentary called “This Black Soil.” Alice was commended by the Virginia State legislature in 2006 and was a 2005 winner of the Impact Award, known now as the Inspire Awards.

All content from Kiddle encyclopedia articles (including the article images and facts) can be freely used under Attribution-ShareAlike license, unless stated otherwise. Cite this article:
Bayview, Virginia Facts for Kids. Kiddle Encyclopedia.