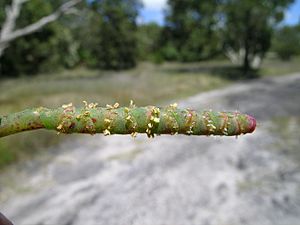 Historically, people used to burn glasswort to collect the ashes. The ashes contained a high amount of soda in them, which was used to make soap and glass. This is thought to be how glasswort received its name.

Glasswort, Sarcocornia quinqueflora, is a species of succulent, salt tolerant plant. It grows as a small shrub, with a lifecycle of several years – which is also known as a perennial lifecycle. They are normally found near salt water bodies (along the coast or estuaries) and grow in a mat form along the ground. The stems are jointed and fleshy when young, but they dry out and appear woody when ageing. The young, fleshy stems are grey or green with sometimes red colouring along the tips. The leaves grow opposite to each other and are connected at the base. They grow on small bumpy petioles – which is the part of a stalk that attaches the leaf to the stem. The leaves then extend down the stem – which in turn, forms the noticeable joints. The leaves look like tiny blades, wrapped around the stem. This formation of the leaves gives the stems a ‘beaded’ look. Growing at the end of the stem, the inflorescences (another name for clusters of flowers) are spikey, and made up of small segments with small, paired cymes. Cymes are a group of flowers with a central stem that matures before the others. Each cyme usually has three flowers entirely immersed in the fleshy part of the joint. The unisex or bisexual flowers are nearly always identical in size and grow in an outwardly symmetrical style along the stems. The flowers have three to four fleshy exterior parts that connect to the apex (highest part of the stem), one or two stamens (the pollen-producing reproductive organ) and an ovary with two or three parts that hold the pollen (the stigma). There is a lot of fruit found in the outer part of the flower, and the fruit wall has a membrane. The seeds are vertical and spherical in shape, light brown, hairy and also have a membrane on the exterior. The hairs take on many forms – they can be angular, slight, curved, conic or straight. There is no feeding tissue (also known as the perisperm) within the seed.

Glasswort, Sarcocornia quinqueflora, is not endemic to New Zealand. In New Zealand it is found mostly on the shoreline in regions throughout the North Island. In the South Island S. quinqueflora is widespread on the east coast, but isn't found on the west coast. In Australia it occurs on the south west and south east areas, and also in parts of the Nullarbor Plain, and part of the east coast of Cape York Peninsula.

There are many species of Sarcocornia, which are also distributed world-wide.

In New Zealand, glasswort is found in mainly coastal areas. It can be found on all islands of New Zealand – including Stewart and the Chatham Islands. Glasswort grows on both coasts of the North Island and down the east coast of the South Island. Interestingly, it is also found in Central Otago, in two locations, roughly 70 km offshore.

Glassworts are perennials, meaning that they go through many reproductive cycles and they do not necessarily need to produce genetically unique seeds all the time. For this reason, they often use ramets to propagate clonally. They make genetically identical copies of the healthiest organisms to spread quickly and asexually. When growth is strong and the environment is right, glassworts will produce genets, a genetically unique individual through seeds in order to keep the population diverse and evolving. Ranets often remain connected to the parent plant in order to survive in harsh conditions until they are fully developed and do not have enough nutrients and water to survive on their own. Seeds generally germinate during the early spring when temperatures begin to warm.

The glasswort is officially characterized as gynodioecious, meaning that there are populations containing only hermaphrodite plants as well as populations containing both female and hermaphrodite plants. Most populations are entirely hermaphrodite except for the coasts of Nelson & Foxton, Tasman Bays, and the central regions of Otago in New Zealand. For the hermaphrodite flowers, they are protogynous. This means that the female stigma matures before the male anther to prevent self-fertilization. For these hermaphrodites, the stigma protrudes 1–2 days before the anther, and the stigma are then visible for 4–6 days. Anthers are revealed individually, one at a time. Anthers open up in the early morning to release pollen. This pollen is then distributed by wind. The flowers produce no nectar and are generally not pollinated by insects. Although, introduced honeybee, Apis mellifera, has been recorded visiting the flowers of the plant and collecting pollen on parts of its body, so this species is thought to possibly help spread pollen. For the female flowers, the stigma protrudes at the same time as the anthers of the hermaphrodite plants. This allows the pollen from the hermaphrodite plants to fertilize the female plants, and the life cycle can begin.

The introduction of invasive species into the endemic regions for glasswort are a major cause of habitat loss. Non-native species tend to grow quicker and faster than the native glasswort, allowing them to easily overtake their habitats. One example of this is in Victoria, Australia where Invasive Cordgrass (Spartina spp.) has changed the makeup of the intertidal sediment flats. The introduction of cordgrass caused these habitats to transform into marshlands. The previous intertidal habitat was important for the survival of the glasswort species, so the transition to marshland left the native glasswort without its habitat.

The glasswort gall mite, Aceria rubifaciens, was discovered in Auckland in 1948 and rediscovered in 2013 in an estuary near the Firth of Thames. This tiny, endemic mite only feeds on the glasswort, which the feeding causes pocket galls on the fresh, young stems. The mites live inside the galls which offer them protection from larger predators and weather conditions.

There isn’t a lot known about these tiny mites, mainly because they have only been found on this particular species of glasswort. So far it has only been found in the North Island, but it can be assumed that it would affect the other populations throughout New Zealand. 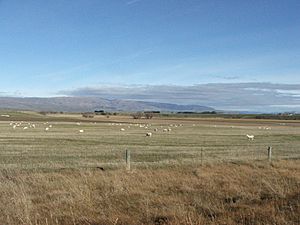 Glasswort has been found growing in inland regions of Central Otago, the Maniototo Plain. This is odd because of its liking for salty soils near coastal areas. The Maniototo plain has developed highly saline soils due to the extreme dryness of the area. As rocks erode, the soil became more and more salty, and there was not enough rain to wash the salt away. This left the soil salty enough to support the glasswort. As the seeds were transported into the area by birds, the plant began to grow in the inland region. 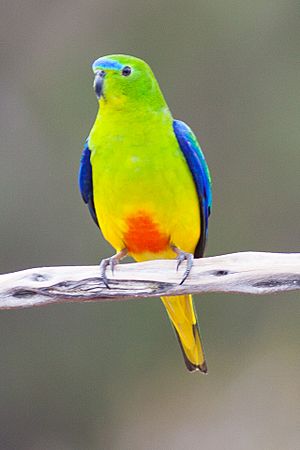 Orange Bellied Parrot of Australia relies heavily on the Glasswort as its main source of food.

One species known to rely heavily on the glasswort is the Orange-Bellied Parrot (Neophema chrysogaster). This parrot is critically endangered, having only around 180 individuals left in the wild. This native Australian bird feeds primarily on the seeds of Sarcocoria quinqueflora. As habitats for the glasswort decline due to human development, it becomes harder for the parrot to find the amount of seeds it needs to survive.

Glasswort Use in Recipes

Glasswort, apart from being a subshrub that can grow in incredibly harsh conditions, is also an edible plant. It is recommended to eat the fresh, young, upper parts of the glasswort stems raw, as they are tender and more flavourful. People are able to eat glasswort on its own, like in a salad, or mixed with other salad ingredients. It can also be used as a garnish with seafood – similar to how restaurants use parsley or watercress. The natural salty content and flavor means that glasswort is good in soups or stews for extra flavour, or can be served as a hot vegetable as well. Using the fresh parts of the stems, glasswort can also be pickled – but very carefully, as like anything when pickling.

A different subspecies of glasswort grows in Nevada and Utah in America, and the Native Americans use the seeds of that particular plant to make ground flour.

There are also certain medicinal properties to glasswort. It is high in Vitamin C, Vitamin A and the B-complex vitamins and has also been described as helping flatulence and digestion. There are also certain glycosides, the bioflavonoid quercetin and isorhamnetin, which have been mentioned as possible aids for cancer.

All content from Kiddle encyclopedia articles (including the article images and facts) can be freely used under Attribution-ShareAlike license, unless stated otherwise. Cite this article:
Beaded samphire Facts for Kids. Kiddle Encyclopedia.