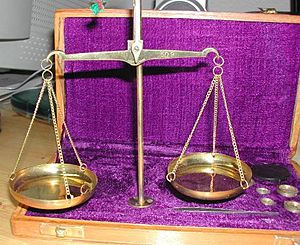 A beam balance is a device used to measure mass. An object is put into a disk on one side that hangs from one end of a bar. It is balanced with weights at the other end. It has a lever with two equal arms and a pan suspended from each arm.

All content from Kiddle encyclopedia articles (including the article images and facts) can be freely used under Attribution-ShareAlike license, unless stated otherwise. Cite this article:
Beam balance Facts for Kids. Kiddle Encyclopedia.