Beaufortia decussata, commonly known as gravel bottlebrush, is a plant in the myrtle family, Myrtaceae and is endemic to the south-west of Western Australia. It has long stems branching only near the upper ends, and scarlet to orange-red flowers in a bottlebrush shape beneath the branches. It was described in John Sims's Edwards Botanical Register as "a very splendid shrub".

Beaufortia decussata is an erect, open shrub with few branches growing to a height of 3 m (10 ft). The leaves are arranged in alternating pairs (decussate) so that they make four rows along the stems. They are egg-shaped, pointed at the end, about 10 mm (0.4 in) long and usually have 5 veins visible.

The flowers are red to orange red and are arranged in heads about 40 mm (2 in) in diameter and 100 mm (4 in) long, forming a cylinder around the long stems under their branches. There are 5 sepals, 5 small petals and 5 bundles of stamens which give the flowers their colour and are much longer than the inconspicuous petals. Flowering occurs either from August to December or from January to April and is followed by fruit which are woody capsules. 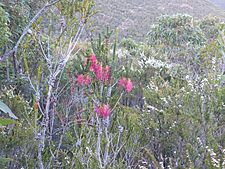 B. decussata growing near the Bluff Knoll walking track. 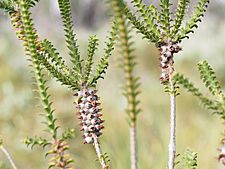 Beaufortia decussata was the first species of Beaufortia to be described. It was formally described in 1812 by Robert Brown in William Townsend Aiton's Hortus Kewensis. The specific epithet is from the Latin decussatus meaning "form crosswise like the letter X, the Roman numeral ten".

Beaufortia decussata occurs in the Esperance Plains, Jarrah Forest and Warren biogeographic regions where it grows in tall shrubland in soils derived from laterite.

Beaufortia decussata is classified as "not threatened" by the Western Australian Government Department of Parks and Wildlife.

All content from Kiddle encyclopedia articles (including the article images and facts) can be freely used under Attribution-ShareAlike license, unless stated otherwise. Cite this article:
Beaufortia decussata Facts for Kids. Kiddle Encyclopedia.