The Beauharnois Canal is located in southwestern Quebec, Canada. The canal is part of the Saint Lawrence Seaway.

Located in Beauharnois-Salaberry Regional County Municipality within the cities of Salaberry-de-Valleyfield, Beauharnois, Saint-Louis-de-Gonzague, and Saint-Stanislas-de-Kostka, the canal connects Lake Saint-Francis to the west (upstream) with Lake Saint-Louis to the northeast (downstream), bypassing a series of rapids on the Saint Lawrence River. 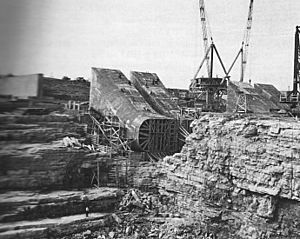 Construction on Beauharnois Canal in 1930

The original Beauharnois Canal opened in 1843, and measured 15 nmi (24 km, 15 mi) in length and was built on the south side of the St. Lawrence River. It replaced the Coteau-du-Lac canal.

The canal became obsolete and was superseded by the Soulanges Canal in 1899 which ran on the north side of the St. Lawrence River.

The present Beauharnois Canal was built between 1929-1932 on the south side of the St. Lawrence River, measuring 24.5 kilometres (15.2 mi) in length, with a minimum depth of 8 metres (26 ft) and width of 182 metres (597 ft). This canal was built as part of a hydroelectric development at Beauharnois which saw a dam and power house built to take advantage of the 24 metres (79 ft) drop between Lake St. Francis and Lake St. Louis. Some of the electricity is used to power a large aluminum smelter in Beauharnois.

In the 1950s, the Beauharnois Canal had 2 locks added as part of the Saint Lawrence Seaway project, which were inaugurated in 1959. This in turn superseded the Soulanges Canal. The locks enable ships up to 27,000 tons to travel between the two lakes.

See also: List of crossings of the Saint Lawrence River and the Great Lakes

Bridges over the canal in downstream order are:

All content from Kiddle encyclopedia articles (including the article images and facts) can be freely used under Attribution-ShareAlike license, unless stated otherwise. Cite this article:
Beauharnois Canal Facts for Kids. Kiddle Encyclopedia.