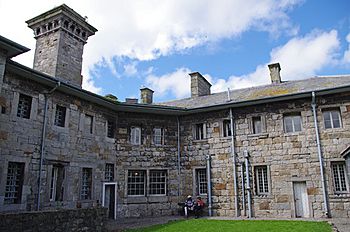 A section of the jail from inside the courtyard

Beaumaris Gaol is a disused gaol located in Beaumaris, Anglesey, Wales. Although no longer in use it remains largely unaltered and is now a museum open to visitors, with around 30,000 visiting each year.

The jail was designed by Hansom and Welch, and was built in 1829. It was expanded in 1867 to accommodate approximately 30 inmates but was closed just 11 years later. The building then became a police station until the 1950s when it became a children's clinic and lastly a museum in 1974. During the Second World War the town's air raid siren was located in the gaol and was kept in operation during the Cold War in case of nuclear attacks. The gaol's chapel is not original to the building, and the pews and pulpit were sourced from a chapel being renovated elsewhere on the island; the numbering of the pews is out of sequence and they are not fixed to the floor.

The prison regime may appear brutal to a modern visitor, but in its day it was seen as humane improvement on earlier gaols. Even so, methods of keeping criminals in check included chains, whippings and isolation in a dark cell for up to three days. It has one of the last working penal treadmills in Britain. The treadmill at Beaumaris is unusual in that it pumped water to the top of the building for use in the cells, meaning that the prisoners were not forced to work for no reason.

The only prisoner to escape from the gaol was John Morris, who escaped on 7 January 1859, using rope he had stolen whilst working with it. He broke his leg while escaping, but made it out of the town, before being recaptured.

All content from Kiddle encyclopedia articles (including the article images and facts) can be freely used under Attribution-ShareAlike license, unless stated otherwise. Cite this article:
Beaumaris Gaol Facts for Kids. Kiddle Encyclopedia.