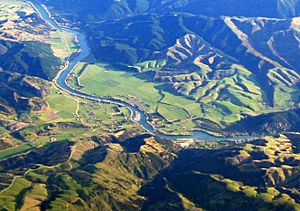 Aerial photo of the Beaumont area in 2006, State Highway 8 crosses the Clutha River just below centre

Beaumont is a small town in inland Otago, in the South Island of New Zealand. It is located on the Clutha River six kilometres southeast of Raes Junction, between Roxburgh and Balclutha. Beaumont is connected to Milton and Roxburgh by State Highway 8.

Beaumont was named for Beaumont Burn, probably about 1857.

For eleven years, Beaumont served as the terminus of a branch line railway that ran from a junction with the Main South Line in Milton. The railway reached Beaumont in 1914 and an extension to Millers Flat was not opened until 1925. This line ultimately became the Roxburgh Branch and operated until 1968. Relics of the railway still remain, including a stock yard and a bridge over the Beaumont River.

All content from Kiddle encyclopedia articles (including the article images and facts) can be freely used under Attribution-ShareAlike license, unless stated otherwise. Cite this article:
Beaumont, New Zealand Facts for Kids. Kiddle Encyclopedia.