Milton, formerly known as Tokomairiro or Tokomairaro, is a town of 2,000 people, located on State Highway 1, 50 kilometres to the south of Dunedin in Otago, New Zealand. It lies on the floodplain of the Tokomairaro River, one branch of which loops past the north and south ends of the town. This river gives its name to many local features, notably the town's main school, Tokomairiro High School.

Founded as a milling town in the 1850s, there has long been dispute as to the naming of the settlement. The town's streets are named for prominent British poets, and it is possible that the town's original intended name of Milltown became shortened by association with the poet of the same name. It is equally possible, however, that the name Milton inspired the choice of poets' names for the streets.

Milton's early history was strongly affected by the discovery of gold by Gabriel Read at Gabriel's Gully close to the nearby township of Lawrence. As Milton stood close to one of the most easily accessible routes to the interior, it grew greatly during the goldrush years of the 1860s and was a major staging post for prospectors heading for the goldfields. 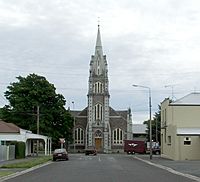 The town was originally established at Fairfax, a settlement nestling at the foot of the hills which lie to the southeast of the town. As communication with the goldfields in the interior became more important, and the desirability of the town becoming a staging post increased, it spread down onto the plains around the river. A Gothic church, Tokomairiro Presbyterian Church, was built at this time by the architect R A Lawson. At the time of its construction, this church was the tallest building at such a southern latitude in the world. The church is still the town's most obvious landmark, and is visible across the Tokomairiro Plains from several kilometres away. It was located at the end of the main road connecting Fairfax with the main route south from Dunedin to the goldfields, and as such is an imposing structure dominating this road.

Milton was an important town in early Otago - much more so than it is today - mainly due to its location on the route to the goldfields, and also for the Bruce Woollen Mills, which were among the province's largest factories. Other prominent industries included the Kiwi Bacon Factory, which had a branch in Milton until the early 1980s. The town's importance in communication in the early years of New Zealand settlement is emphasised by it being one of the two centres first linked by long-distance telephony, with a pioneering line set up between Milton and Dunedin in February 1878. It was not until the early twentieth century that it was superseded in size by the now considerably larger local town of Balclutha. The town was also important in education in early Otago - the Tokomairiro School - now split into Milton Primary School and Tokomairiro High School - was founded in 1856, only eight years after the founding of the province itself, and was one of the province's leading schools for many years thereafter.

An early claim to fame for Milton was its pottery, often regarded as some of the country's finest. Clay is a plentiful natural resource in South Otago, and potteries were a major employer in the late 19th century throughout South Otago and Southland. Between 1873 and 1915 numerous pottery works operated from the Milton area, starting with William White's short-lived Tokomairiro Steam Pottery Works, reputedly the first industrial kilns in the Southern Hemisphere.

The Milton Pottery works was rescued in 1880 by former Mayor of Dunedin (1876) Charles Stephen Reeves. The industry reached its height in the 1880s, at which time five kilns were operating and over 40 staff were employed, producing building materials such as bricks and tiles, sanitary ceramics such as washbasins, and domestic and decorative dinner sets, vases, and jars.

The industry in Milton did not survive the loss of manpower during World War I, though pottery as an industry continued in South Otago at Benhar near Balclutha, which was a major producer of toilet bowls and other domestic ceramics until the 1990s.

Today, Milton is, after Balclutha, the second largest town in South Otago. Its form is largely a ribbon development along the main highway (State Highway 1), with an extension north of the northern branch of the river (the suburb of Helensbrook). The old town of Fairfax is now a village with the Maori name of Tokoiti (meaning "small poles").

Milton's main economic livelihood is as a service town for the surrounding farming community, although forestry is also becoming of increasing importance. It is also home to Calder Stewart, one of New Zealand's largest construction firms.

The farming settlement of Milburn two kilometres north of Milton, has recently been controversially chosen as the site of a new prison. 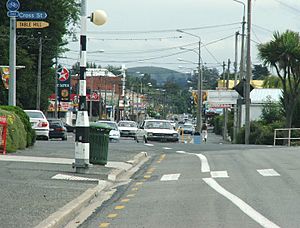 The reason for the anomaly is disputed. A widely accepted view, but not the official view, states that the road was set out by two surveyors, one moving north and the other moving south, each of whom set out the road to the right of their survey line. Another widely held belief is that the change of course was designed to protect a large tree which formerly stood at the site where the kink is. However, why during the development of a milling area a single tree would be protected, and why the road would not return to its original line after passing the tree are both unexplained by this theory.

Milton School is a co-educational state primary school for Year 1 to 6 students, with a roll of 163 as of July 2016.

Tokoiti School is a co-educational state primary school for Year 1 to 6 students, with a roll of 46.

St Mary's School is a co-educational state-integrated Catholic primary school for Year 1 to 6 students, with a roll of 82.

Tokomairiro High School is a co-educational state secondary school for Year 7 to 13 students, with a roll of 271.

All content from Kiddle encyclopedia articles (including the article images and facts) can be freely used under Attribution-ShareAlike license, unless stated otherwise. Cite this article:
Milton, New Zealand Facts for Kids. Kiddle Encyclopedia.