The Beaver Head Light is located high on a bluff on the southern tip of Beaver Island. Boats trying to navigate North on Lake Michigan need to carefully work their way between Beaver Island and Gray's Reef.

In 1866, the attached yellow brick lighthouse keeper's dwelling was constructed. A frame addition was added to the keepers quarters to accommodate assistant keepers.

In 1915, the 22-by-40-foot (6.7 m × 12.2 m) fog signal building was constructed. Other outbuildings on the grounds including an oil house, garage and storage building and outhouse.

A radio beacon was placed in 1962, at which time the station was decommissioned and declared surplus. That same year, the original Fourth Order Fresnel lens was removed and placed in the dwelling, where it can still be seen.

In 1975, the Charlevoix Public Schools purchased the site for $1.00. After some vandalism was incurred, in 1978 the District founded an alternative school for youth aged 16–21. The school district has operated an Environmental and Vocational Educational Center in the keepers dwelling. Maintenance and restoration of the structure is part of the curriculum. Beginning in 1978, recurrent summer work/study programs greatly restored the station, which was then opened as a school.

In 2003, a grant was obtained to repair spalling of the exterior brick work on the fog signal building. A state grant awarded two years later provided $23,000 for oil house restoration.

The light station is listed on National Register of Historical Places (reference #78001495). It is also on the State List/Inventory. 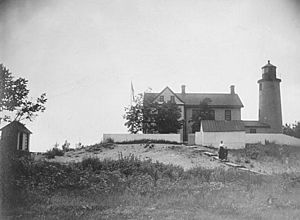 All content from Kiddle encyclopedia articles (including the article images and facts) can be freely used under Attribution-ShareAlike license, unless stated otherwise. Cite this article:
Beaver Island Head Light Facts for Kids. Kiddle Encyclopedia.