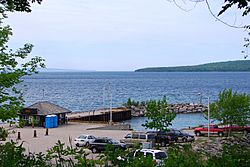 Ferry terminal in Cedar Point (Tiny, Ontario) to Christian Island, with Beckwith Island on the right.

Beckwith Island is the eastern of three islands in southeastern Georgian Bay in Ontario, Canada. Its highest elevation is 226 meters (741 feet) above sea level. Like its populated neighbour Christian Island to the west, and Hope Island to the northwest, the uninhabited island is part of an Ojibwa reserve. On the mainland, Cedar Point lies directly south of the island and Thunder Beach is located to the southeast of Beckwith Island. The island is a pristine, and ecologically sensitive island of over 800 acres (324 ha), featuring sandy beaches and dunes, juniper bushes, as well as the rare and protected three-pronged awn grass, plus forests of oak, maple, birch and conifer trees and no development of any kind except for simple outhouses to serve boaters, campers and picnickers. Camping is permitted but you must obtain permission in advance from the local band council on Christian Island. The eastern side of Beckwith island is often a favourite place for boats to moor. Beckwith Island and the attached "Little Beckwith" are part of the Beausoleil First Nation.

There is currently no development on the island. There are two boat anchorage points. One on the north and another on the south side of the islands where the narrows of the two islands meet. Sandy beaches are at both anchorage points.

All content from Kiddle encyclopedia articles (including the article images and facts) can be freely used under Attribution-ShareAlike license, unless stated otherwise. Cite this article:
Beckwith Island Facts for Kids. Kiddle Encyclopedia.