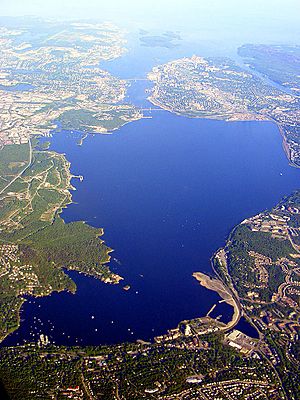 Bedford Basin is a large enclosed bay, forming the northwestern end of Halifax Harbour on Canada's Atlantic coast. It is named in honour of John Russell, 4th Duke of Bedford. 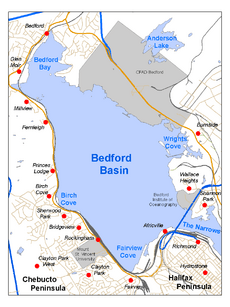 Geographically, the basin is situated entirely within the Halifax Regional Municipality and is oriented northwest-southeast, measuring approximately 8 kilometres long and 5 kilometres wide, surrounded by low hills measuring up to 160 metres (525 feet) in elevation, although most elevations range up to 30–60 m (100–200 ft).

The basin is quite deep with some areas measuring several dozen metres in depth; the good holding ground (mud) on the basin floor make it an ideal protected anchorage. The basin's geologic history can be traced to the Wisconsin Glaciation when it, along with "The Narrows", formed part of the pre-historic Sackville River valley.

The basin contains the following sub-basins:

Bedford on the northwestern corner takes its name from the basin, while Dartmouth sits on its eastern shore and Rockingham occupies the majority of the western shore. Africville Park is situated on the southern shore near the entrance into The Narrows.

The North American station of the Royal Navy was based just outside the entrance of the basin from 1759 to 1905, at the Royal Naval Dockyards. The naval base served as the station's headquarters until 1818, when it became the summer headquarters of the station. Defences were built around the approach towards the basin's entrance, with the construction of the York Redoubt at Ferguson's Cove, as well as fortifications on Georges Island, and McNabs Island. These defences were a part of the Halifax Defence Complex. In 1907, the Royal Naval Dockyards was transferred to the Government of Canada, and continues to operate as CFB Halifax.

A depiction of an Allied-convoy in the Bedford Basin during World War I. Dazzle camouflage was used prominently during the war in an effort to mislead enemies on a ship's course of direction, distance, and speed.

In December 1917 the basin was the site of the world's worst non-nuclear explosion - genrally known as the Halifax explosion.

The basin played a key role during the First and Second World Wars when the German navy used submarines to disrupt Allied shipping. Given the size of the Port of Halifax, and its vicinity to Europe in contrast to other North American ports, the basin was used as an assembly point for Atlantic-convoys bound for Europe. With defences built just outside of the only access point into the basin (a strait called The Narrows), it provided the Royal Navy and Royal Canadian Navy a safe place to assemble its convoys consisting of hundreds of merchant ships in relative security, while torpedo nets kept German submarines at bay.

In 1994, the defences that protected Bedford Basin designated a National Historic Site of Canada, commemorating the assembly of convoys in Bedford Basin during the Second World Wars. A plaque was erected at Admiral Harry DeWolf Park on the Bedford waterfront. The park derives its name from Admiral H.G. DeWolf, of the Royal Canadian Navy.

All content from Kiddle encyclopedia articles (including the article images and facts) can be freely used under Attribution-ShareAlike license, unless stated otherwise. Cite this article:
Bedford Basin Facts for Kids. Kiddle Encyclopedia.