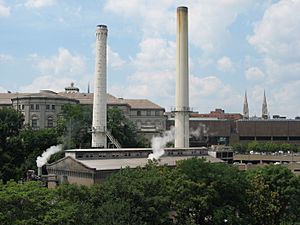 The Bellefield Boiler Plant, affectionately known as the "Cloud Factory", in Junction Hollow

Bellefield Boiler Plant, also known as "The Cloud Factory" from its nickname's use in Michael Chabon's 1988 debut novel The Mysteries of Pittsburgh, is a boiler plant located in Junction Hollow (referred to as "The Lost Neighborhood" in Chabon's book) between the Carnegie Institute of Pittsburgh and Carnegie Mellon University in the Oakland district of Pittsburgh, Pennsylvania.

During its coal burning years, the plant could consume up to a 70-ton hopper car of coal per day, delivered by the Pittsburgh Junction Railroad (now in the P&W Subdivision of CSX) that ran through Junction Hollow next to the plant. The plant's small 1942 Plymouth DE 25T locomotive would shuttle the cars between the siding and the plant via a wooden trestle bridge (demolished 2012) spanning Boundary Street. 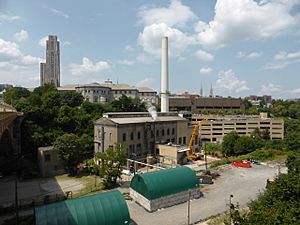 Bellefield Boiler Plant as it looked in 2014. 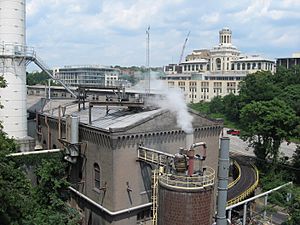 According to reporting by the Pittsburgh Post-Gazette the 2007 film The Mysteries of Pittsburgh does not use the actual Bellefield Boiler Plant, but instead uses what remains of the Carrie Furnace, a storied blast furnace that was part of US Steel's Homestead Works, a few miles south in Swissvale, Pennsylvania.

Source of the phrase the "Cloud Factory" 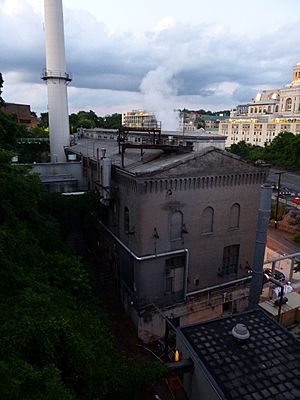 Chabon may have coined the name "Cloud Factory" himself, or heard it first from locals before employing it to great effect in his novel. Or he may have borrowed the phrase from Henry David Thoreau. It appears in Thoreau's essay Ktaadn and the Maine Woods, which was first published in five serialized installments in Sartain's Union Magazine in 1848. The piece describes a transcendental, "mountain-top" experience Thoreau had in the summer of 1846 while hiking Mount Katahdin in Maine:

Sometimes it seemed as if the summit would be cleared in a few moments, and smile in sunshine; but what was gained on one side was lost on another. It was like sitting in a chimney and waiting for the smoke to blow away. It was, in fact, a cloud factory—these were the cloud-works, and the wind turned them off done from the cool, bare rocks.

All content from Kiddle encyclopedia articles (including the article images and facts) can be freely used under Attribution-ShareAlike license, unless stated otherwise. Cite this article:
Bellefield Boiler Plant Facts for Kids. Kiddle Encyclopedia.