Bellepoint was an unincorporated community located in Summers County, West Virginia, United States. Bellepoint was later merged into Hinton; however, it had its own post office, as seen in the image below: 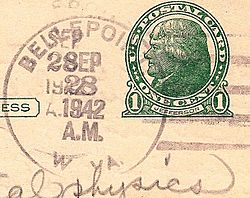 Bellepoint was established at the same time as Hinton.

Landmarks of Bellepoint include the Bluestone Dam, which was built in 1949 to control flooding and to form the Bluestone Lake. This lake is the source of drinking water for much of Summers County and parts of Mercer County. There is also a recreational centre which has two baseball fields, a basketball court, tennis court and a playground.

All content from Kiddle encyclopedia articles (including the article images and facts) can be freely used under Attribution-ShareAlike license, unless stated otherwise. Cite this article:
Bellepoint, West Virginia Facts for Kids. Kiddle Encyclopedia.