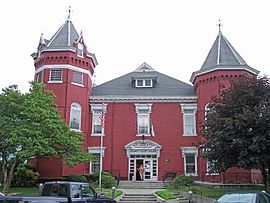 The Summers County Courthouse in Hinton

Hinton is a city in Summers County, West Virginia, United States. The population was 2,676 at the 2010 census. It is the county seat of Summers County. Hinton was established in 1873 and chartered in 1897. Hinton was named after John "Jack" Hinton, the original owner of the town site. Much of Hinton's downtown was placed on the National Register of Historic Places in 1984.

Part of Paramount's 1994 film Lassie was shot in Hinton.

Hinton is situated along the New River just north of its confluence with the Greenbrier River. Bluestone Lake is located near Hinton. The city is about 28 miles from Beckley and 90 miles from Charleston.

The climate in this area has mild differences between highs and lows, and there is adequate rainfall year round. According to the Köppen Climate Classification system, Hinton has a marine west coast climate, abbreviated "Cfb" on climate maps.

There were 1,276 households, of which 21.9% had children under the age of 18 living with them, 34.8% were married couples living together, 13.2% had a female householder with no husband present, 4.9% had a male householder with no wife present, and 47.0% were non-families. 42.9% of all households were made up of individuals, and 22% had someone living alone who was 65 years of age or older. The average household size was 2.07 and the average family size was 2.83.

There are several museums in Hinton, including the Veterans Memorial Museum, the Hinton Railroad Museum, and King's Civil War Museum. The City of Hinton is currently restoring the CSX passenger depot and the Freight Depot to be used as possible tourist draws in the future. City of Hinton Parks and recreation department has a water park complete with a water slide and swimming pool. They also have a 10,000 sq ft public fitness center.

Amtrak, the national passenger rail service, provides service to Hinton under the Cardinal route. CSX owns the rail line through Hinton, which is the mainline of the former Chesapeake and Ohio Railway. Hinton was a major terminal for the C&O.

All content from Kiddle encyclopedia articles (including the article images and facts) can be freely used under Attribution-ShareAlike license, unless stated otherwise. Cite this article:
Hinton, West Virginia Facts for Kids. Kiddle Encyclopedia.