Bellevue Hill is a harbourside eastern suburb of Sydney, in the state of New South Wales, Australia, located 5 kilometres east of the Sydney central business district, in the Municipality of Woollahra.

The suburb is located within the Division of Wentworth electorate.

In the early 19th century, Irish-Australian immigrants referred to the area as Vinegar Hill, after the Battle of Vinegar Hill, an engagement during the 1798 uprising of the United Irishmen in south-east Ireland. Governor Lachlan Macquarie took great exception to this and decided to name the suburb Bellevue Hill, the belle vue meaning beautiful view.

Later in that century, Bellevue Hill became the home of the Fairfax family, who lived at Trahlee, in Ginahgulla Road, which was leased by James Fairfax from 1866 to 1878. They then moved to Ginahgulla (now known as Fairfax House and owned by The Scots College) in the same road. The Fairfax family were responsible for establishing the Fairfax Media empire, which became a major force in the Australian news media (see also John Fairfax).

A feature was the tram only viaduct over Barcom Ave and Boundary Street in Darlinghurst as the line headed into MacDonald Street. This viaduct is now a road bridge. The line then twisted down Glenmore, Gurner and Hargreave Streets in Paddington, then Moncur and Queen Streets in Woollahra. Here, a connection to Oxford Street allowed access to the Waverley Depot. The line then travelled down Edgecliff and Victoria Roads, then wound along Birriga Road in Bellevue Hill, finally running down Curlewis Street in Bondi to join the Bondi Beach via Bondi Junction line on Campbell Parade, to the North Bondi terminus. The line was double track throughout with numerous points to allow short working.

The line followed approximately the current route of bus 389 between the city and Woollahra and route X84 between Woollahra and Bondi Beach.

According to the 2011 census of Population, there were 10,765 residents in Bellevue Hill. 56.3% of residents were born in Australia. The most common other countries of birth were England 5.1%, South Africa 4.7% and New Zealand 2.4%. 73.9% of residents spoke only English at home. Other languages spoken at home included Hebrew 1.3%, Cantonese 1.3% and Mandarin 1.1%. The most common responses for religious affiliation were Judaism 23.0%, No Religion 19.2% and Catholic 16.7%. The most common occupations for residents were Professionals 41.9%, Managers 20.7% and Clerical and Administrative Workers 12.8%.

The following buildings are on the Register of the National Estate. 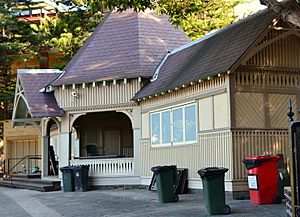 Since 1908, Bellevue Hill has been represented in one of Australia's most popular sporting competitions, the National Rugby League, by the Sydney Roosters, officially known as the Eastern Suburbs District Rugby League Football Club.

All content from Kiddle encyclopedia articles (including the article images and facts) can be freely used under Attribution-ShareAlike license, unless stated otherwise. Cite this article:
Bellevue Hill, New South Wales Facts for Kids. Kiddle Encyclopedia.