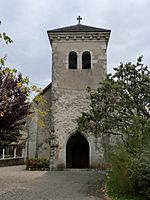 A view of the commune

Belmont-Luthézieu is a former commune. It is found in the Auvergne-Rhône-Alpes region in the Ain department in the east of France. On 1 January 2019, it was merged into the new commune of Valromey-sur-Séran. In 2009, 502 people lived in the commune. The inhabitants are the Belmontais. The local economy is mostly based around agriculture and wine. The most important monuments in the commune are the Luthézieu church, listed as a monument historique, the Château d'Hostel, a renaissance castle, and the ruins of the Château de Belmont. Famous people from Belmont-Luthézieu include Gabriel Taborin , a religious man from the 19th century. Tony Desjardins, an architect, died in this commune.

All content from Kiddle encyclopedia articles (including the article images and facts) can be freely used under Attribution-ShareAlike license, unless stated otherwise. Cite this article:
Belmont-Luthézieu Facts for Kids. Kiddle Encyclopedia.