Benedict is an unincorporated town and census-designated place in Charles County, Maryland, United States, located on the Patuxent River in southern Maryland. As of the 2010 census, it had a population of 261.

Originally a fishing village along the Patuxent River in the southern Province of Maryland in the late 17th century, it was named Benedict-Leonardtown for Benedict Leonard Calvert, (1700-1732), 15th Proprietary Governor of Maryland, serving under his older brother, Charles Calvert, 5th Baron and Lord Baltimore, (1699-1751). 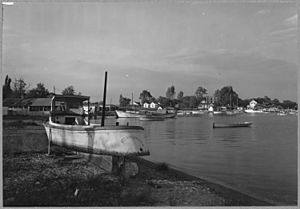 Oyster boats and pleasure craft docked in the Patuxent River at Benedict, 1941

In the War of 1812, Benedict was the location where the British Army led by General Robert Ross landed on August 18, 1814, after having fought fierce naval battles with American naval forces in the Patuxent. From Benedict, the British began their march to Washington, D.C., routing a larger American force at the Battle of Bladensburg before ultimately burning the capital. Following this, they failed to capture Baltimore in the Battle of Baltimore.

Benedict was the site of Camp Stanton, constructed in October 1863 for the Maryland 7th Regiment. Camp Stanton was also the location where the Maryland 19th Regiment of the United States Colored Troops was formed on December 19, 1863, with freed slaves who were purchased for their freedom by the United States Government to serve as soldiers. This unit distinguished itself at the Battle of the Wilderness. Some of its members included the Rev. William Saunders Crowdy and his brother Daniel, of a plantation in St. Mary's County, Maryland.

A school was established on the site to educate the black soldiers, most of whom had received no education when they were slaves. The school was run by Samuel C. Armstrong.

Adjacent to the town is the Benedict Bridge, a 0.5-mile-long (0.80 km) bridge where Maryland Route 231 crosses the Patuxent River from Charles County into Calvert County. The town also has one or two seafood restaurants, and the only church in southern Maryland to offer masses in Latin.

All content from Kiddle encyclopedia articles (including the article images and facts) can be freely used under Attribution-ShareAlike license, unless stated otherwise. Cite this article:
Benedict, Maryland Facts for Kids. Kiddle Encyclopedia.