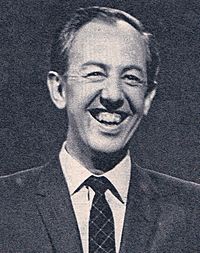 Bengt Walter Feldreich (12 September 1925 – 21 October 2019) was a Swedish radio and television journalist, producer and television presenter. He worked for public service between 1950 until 1985. He produced and hosted the show "Snillen spekulerar" on SVT, the annual Christmas Eve broadcasts from the same channel. He was born in Stockholm.

Feldreich died on 21 October 2019 in Stockholm at the age of 94, from pneumonia.

All content from Kiddle encyclopedia articles (including the article images and facts) can be freely used under Attribution-ShareAlike license, unless stated otherwise. Cite this article:
Bengt Feldreich Facts for Kids. Kiddle Encyclopedia.