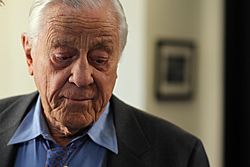 Benjamin Crowninshield "Ben" Bradlee (August 26, 1921 – October 21, 2014) was a vice president at-large of The Washington Post. He was executive editor of the Post from 1968 to 1991. He became a national figure during the presidency of Richard Nixon, when he challenged the federal government over the right to publish the Pentagon Papers and oversaw the publication of Bob Woodward and Carl Bernstein's stories documenting the Watergate scandal.

Bradlee was born on August 26, 1921 in Boston, Massachusetts. He is of English descent. He studied at the Columbia University Graduate School of Journalism and at Harvard University. Bradlee was married three times; two of the marriages ended in divorce. His last wife, Sally Quinn worked for the Washington Post. Bradlee had four children.

All content from Kiddle encyclopedia articles (including the article images and facts) can be freely used under Attribution-ShareAlike license, unless stated otherwise. Cite this article:
Benjamin C. Bradlee Facts for Kids. Kiddle Encyclopedia.