Bere Ferrers station on the Tamar Valley Line is situated near the village of Bere Ferrers in Devon, England. The station is on the former Southern main line between Exeter and Plymouth via Okehampton. It is currently operated by Great Western Railway (GWR). 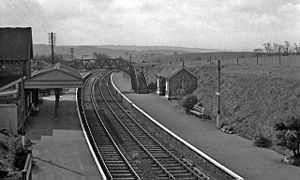 The station was originally called Beer Ferris after the local Beer family who owned several nearby villages. However, in 1897, the railway authorities of the time decided that this name promoted an unrefined image of the village due to the association with beer, and therefore changed the name to Bere Ferrers. The original spelling can still be seen on the sign on the signal box in the heritage centre.

Through services from Lydford were withdrawn on 6 May 1968 and the line reduced to a single track on 7 September 1970.

Bere Ferrers is served by GWR trains on the Tamar Valley Line from Gunnislake to Plymouth. Connections with main line services can be made at Plymouth, although a small number of Tamar Valley services continue beyond Plymouth.

The sidings alongside the station form the Tamar Belle Heritage Centre. This includes some old carriages which are used as a restaurant and as camping coaches. The LSWR signal box was erected here in 1989/90 but was formerly at Pinhoe railway station on the outskirts of Exeter.

The railway from Plymouth to Gunnislake is designated as a community railway and is supported by marketing provided by the Devon and Cornwall Rail Partnership. The line is promoted under the "Tamar Valley Line" name.

The Olde Plough Inn takes part in the Tamar Valley Line rail ale trail, which is designed to promote the use of the line. The line is also part of the Dartmoor Sunday Rover network of integrated bus and rail routes.

All content from Kiddle encyclopedia articles (including the article images and facts) can be freely used under Attribution-ShareAlike license, unless stated otherwise. Cite this article:
Bere Ferrers railway station Facts for Kids. Kiddle Encyclopedia.