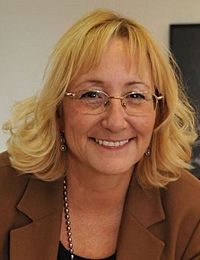 Hatice Beril Dedeoğlu (9 December 1961 – 13 March 2019) was a Turkish academic and politician. She was born in Ankara. She was the Minister of European Union Affairs led by Prime Minister Ahmet Davutoğlu between 22 September and 17 November 2015. She worked as a columnist for the newspapers Star, Today's Zaman, Zaman, Agos and Yeni Şafak.

Dedeoğlu died on 13 March 2019 from a cerebral hemorrhage in Ankara, aged 57.

All content from Kiddle encyclopedia articles (including the article images and facts) can be freely used under Attribution-ShareAlike license, unless stated otherwise. Cite this article:
Beril Dedeoğlu Facts for Kids. Kiddle Encyclopedia.