Berkeley Sound (tinted) in the Falklands 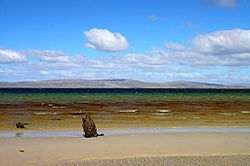 Berkeley Sound with Wickham Heights in the background 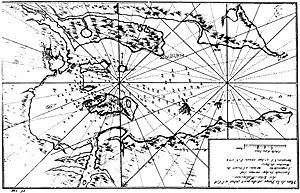 Berkeley Sound (French: Baye Accaron, Spanish: Bahía de la Anunciación ) is an inlet, or fjord in the north east of East Falkland in the Falkland Islands. The inlet was the site of the first attempts at colonisation of the islands, at Port Louis, by the French.

Berkeley Sound has several smaller bays within it - Uranie Bay, Port Louis harbour and Johnson's Harbour bay, separated by Grave Point, and includes islands such as Hog Island, Kidney Island (a nature reserve) and Long Island. It was enlarged as the result of glacial action.

Berkeley Sound was visited by Charles Darwin during his voyage on HMS Beagle in 1834. He found it an "undulating land, with a desolate and wretched aspect".

Berkeley Sound is used by the fishing industry as a designated locality for the transshipment of fish, with accidental oil spills having occurred in the process.

All content from Kiddle encyclopedia articles (including the article images and facts) can be freely used under Attribution-ShareAlike license, unless stated otherwise. Cite this article:
Berkeley Sound Facts for Kids. Kiddle Encyclopedia.