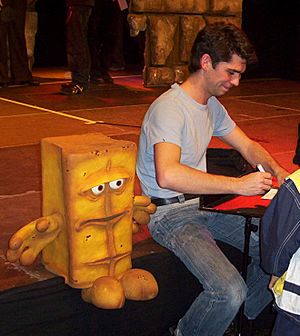 Bernd is a depressed, grumpy, curmudgeonly, constantly bad-tempered, surly, fatalistic, melancholic loaf of pullman bread speaking in a deep, gloomy baritone. He is small, rectangular and golden brown with hands directly attached to his body, rings around his eyes and a thin-lipped mouth. According to himself, he belongs to the species "Homo Brotus (= 'Breadus') Depressivus". His favourite activities include staring at his south wall at home, learning the pattern of his woodchip wallpaper by heart, reading his favourite magazine The Desert and You, and enlarging his collection of the most boring railway tracks on video. Bernd sympathizes firstly with himself. His favorite expression is Mist!, used in much the same way as the English "crap". His other catchphrases are: "I would like to be left alone," "I would like to leave this show," and "My life is hell."

According to the official version, the short-armed bread character made its first appearance as part of an advertising campaign for a bakery chain. When the campaign turned out unsuccessful, Bernd was forced to apply for job at the KI.KA (more specifically, the MDR member of the ARD) which is also the reason for his permanent scowl. Bernd himself does not want to appear on television and thinks it is a "dirty business".

Bernd interacts with two co-main characters. One is the chatty Chili das Schaf (Chili the Sheep), a female, yellow sheep with flaming red hair. Chili, the show's Gastgeberin (hostess), is a Stuntschaf (stuntsheep) who finds it exciting to have close calls with accidents. The other main character is the show's technical expert, the always pleasant Briegel der Busch (Briegel the Bush), a green, bespectacled bush with flowers and leaves in lieu of hair. Briegel is an inventor who loves to build complicated devices that almost inevitably explode of their own accord - these devices are usually what is sold on the show. In contrast to Bernd, they enjoy adventures and the excitement of life. Bernd doesn't hide that he doesn't think very highly of his colleagues, refusing to call them by name (instead calling them "Bush" and "Sheep" respectively) while they treat him as their best friend, even give him nicknames such as "Bernti".

The first show starring Bernd, Chili and Briegel was the 2001 pastiche Tolle Sachen, die einzige Werbesendung auf KI.KA (English: Great things, the only advertising show on KI.KA) (KI.KA is actually a public, commercial-free channel, similar to PBS Kids). In this show Chili and Briegel would advertise an object that would be tested by a "randomly" chosen tester that would invariably turn out to be Bernd. Shows with Bernd, Chili and Briegel also include pastiches of Robin Hood, Star Trek (owned by ViacomCBS, owner of the German version of Nickelodeon, KI.KA's competitor) Western and fairy tales. 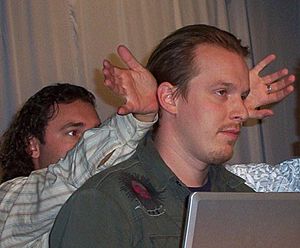 Bernd was created in 2000 by Thomas Krappweis, of the production company Bumm Film in Munich, Bavaria. KI.KA had asked several entertainment companies to create a new sheep mascot, including The Jim Henson Company. Krappweis was dining in a pizzeria one night and scribbled sketches on a napkin while watching a bread basket. He obtained a square-shaped loaf of bread to which he then gave the face of his colleague Norman Cöster, who also shares many personality traits with Bernd.

Similarly, Krappweis himself served as archetype for Chili the Sheep, who - just like Krappweis himself in his earlier years - gets on people's nerves with nonsensical stunts, while Briegel the Bush was modeled after a further producer of the series, Michael Briegel. He, too, is said to have a predisposition for wreaking havoc - according to an anecdote, he once set fire to an office computer.

The actual character designs of Bernd and Briegel are the work of cartoonist Georg Graf von Westphalen. Bernd is played and voiced by the puppeteer Jörg Teichgraeber. 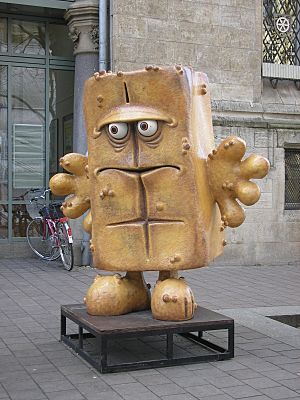 Statue of Bernd das Brot back in front of the town hall in Erfurt, Germany after its kidnapping

In fall 2007, KI.KA donated a statue of Bernd to the German city of Erfurt, Thuringia, where KI.KA is based, to celebrate the channel's tenth anniversary. The statue is 2 m (6 ft 7 in) high, weighs 125 kg (276 lb) and is made of plastic. It stands on the Fischmarkt (English: Fish market), the city's main square, next to the neo-gothic town hall and is a tourist attraction. On 21 January 2009, the figure disappeared. It was next seen in a video released on YouTube, in which a group of activists calling themselves "Team 129 A" claimed responsibility for its kidnapping. Bernd expressed solidarity with the activists in the video, prompting several media to joke that he had developed Stockholm syndrome.

The activists were squatting in the abandoned Topf and Sons factory, where ovens and gas chamber ventilation systems for the Auschwitz-Birkenau extermination camp were manufactured. The occupation was to prevent the city of Erfurt from redeveloping the area into apartments and office space. They opened a literary cafe and were giving lecture events. The negotiations broke down when the activists rejected an offer for alternative housing. The squatters themselves denied involvement in Bernd's kidnapping, claiming a group of sympathizers might be responsible for it.

The public broadcaster Mitteldeutscher Rundfunk, which owns the rights to Bernd das Brot, quickly forced YouTube to remove the video from the site by having their lawyers claim copyright infringements. Steffen Kottkamp, head of KI.KA, strongly criticized Bernd's kidnapping. Krappweis called for the figure's return, stating that "Kidnapping, even of bread loaves, is the wrong means of achieving political goals". Fans set up an online petition calling for the return of the statue in Erfurt.

The Bernd figure was eventually found intact by chance on 1 February 2009 in the basement vault of a disused barracks in Nohra, between Erfurt and Weimar. According to Spiegel Online, five children had been searching the area to collect period artifacts before it was demolished. They then discovered the Bernd statue and alerted KI.KA and the police. How the statue ended up there is unknown. After forensics experts confirmed that it was the genuine statue, it was carried out of the basement by six police officers and ultimately brought back to its original location on the Fischmarkt in front of Erfurt's town hall.

All content from Kiddle encyclopedia articles (including the article images and facts) can be freely used under Attribution-ShareAlike license, unless stated otherwise. Cite this article:
Bernd das Brot Facts for Kids. Kiddle Encyclopedia.