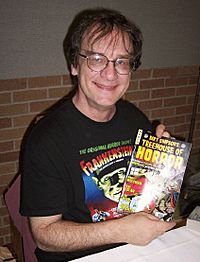 Bernard Albert "Bernie" Wrightson (October 27, 1948 – March 18, 2017) was an American artist. He was known for co-creating the creature Swamp Thing, his Frankenstein illustration work, and for his other horror comics and illustrations, which feature his trademark intricate pen and brush work.

Wrightson was born in Dundalk, Maryland. He was married to comic artist Michele Wrightson from 1976 until her death in 2015. He later remarried to Liz Wrightson and lived together in Austin, Texas.

All content from Kiddle encyclopedia articles (including the article images and facts) can be freely used under Attribution-ShareAlike license, unless stated otherwise. Cite this article:
Bernie Wrightson Facts for Kids. Kiddle Encyclopedia.