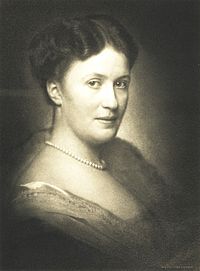 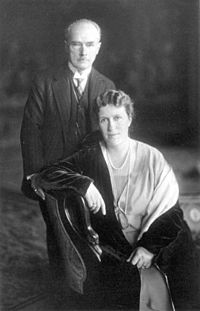 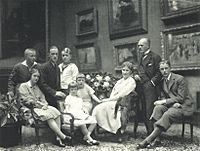 Bertha with family, 1928, by Nicola Perscheid

Bertha Krupp von Bohlen und Halbach (29 March 1886 – 21 September 1957) was a member of the Krupp family, Germany's leading industrial dynasty of the 19th and 20th centuries. As the elder child and heir of Friedrich Alfred Krupp she was the sole proprietor of the Krupp industrial empire from 1902 to 1943, although her husband, Gustav Krupp von Bohlen und Halbach, ran the company in her name. In 1943 ownership of the company was transferred to her son Alfried.

All content from Kiddle encyclopedia articles (including the article images and facts) can be freely used under Attribution-ShareAlike license, unless stated otherwise. Cite this article:
Bertha Krupp Facts for Kids. Kiddle Encyclopedia.