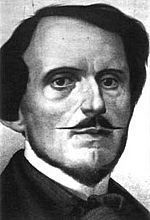 Bettino Ricasoli, 1st Baron Ricasoli, 1st Count of Brolio (29 March 1809 - 23 October 1880) was an Italian statesman. He was born in Florence. Ricasoli served as Mayor of Florence from January 1848 to November of the same year. Member of the "Historic Right", after the Camillo Cavour's death Ricasoli became Prime Minister of the Kingdom of Italy. He was Prime Minister of Italy from 12 June 1861 to 3 March 1862 and from 20 June 1866 to 10 April 1867. He was also twice Foreign Minister, twice Interior Minister and once Minister of War..

In the last years of his life he was mayor of Gaiole in Chianti, a small town near Siena. Ricasoli died in his castle in Broglio, another village near Siena. Ricasoli's private life and public career were marked by the utmost integrity, and by a rigid austerity which earned him the name of the "Iron Baron". He was also a freemason.

All content from Kiddle encyclopedia articles (including the article images and facts) can be freely used under Attribution-ShareAlike license, unless stated otherwise. Cite this article:
Bettino Ricasoli Facts for Kids. Kiddle Encyclopedia.