Beverly Center is a shopping mall in Los Angeles, California, United States. It is an eight-story structure located at the edge of Beverly Hills and West Hollywood, between La Cienega and San Vicente boulevards. Anchor tenants include Bloomingdale's and Macy's, and a Macy's men's store. The mall's dramatic six-story series of escalators offer visitors views of the Hollywood Hills, Downtown Los Angeles, and Los Angeles Westside.

The Beverly Center was originally opened in 1982 by developers A. Alfred Taubman, Sheldon Gordon, and E. Phillip Lyon. (The site's former occupant was a small amusement park known as "Beverly Park and Kiddyland", featuring a Ferris wheel, merry-go-round, and mini roller-coaster, and a pony ride called "Ponyland". The northeast corner of the mall, at the intersection of Beverly and La Cienega Boulevards, is the geographic center of the city's studio zone.

The mall's unusual shape and lack of street frontage along San Vicente Boulevard are the result of both its position at the intersection of a number of angled streets and its location above the Salt Lake Oil Field. As of 2009[update] the western portion of the mall property contained a cluster of oil wells in an active drilling enclosure operated by Freeport-McMoRan (formally Plains Exploration & Production.

The mall opening featured the debut on July 16, 1982, of a multiplex movie theater containing 14 screens, then the largest number of movie screens in any US multiplex shopping mall. Even though the movie theater was located in Los Angeles, the opening was newsworthy enough to warrant a full article in The New York Times. In the late 1980s, three smaller screens were removed on the main floor, so two larger auditoriums could be built on the roof. The theater portion of the mall was closed altogether on June 3, 2010.

The mall contained the USA's first Hard Rock Cafe, the third installment of the restaurant chain, following those in London and Toronto. This location closed in 2007. The Beverly Center was originally anchored by Bullock's and The Broadway department stores, and in 1993 Bullock's opened a separate Bullock's Men's store, before both stores were renamed Macy's in 1996. The Broadway closed its location in 1996 when it was absorbed into Macy's and its former store was reopened as a Bloomingdale's in 1997. Bed Bath & Beyond formerly operated a store at the Beverly Center until it closed in 2016. 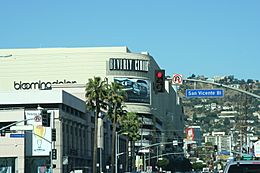 The Beverly Center underwent a renovation from 2006 to 2008 that had stores complaining about a decline of foot traffic. These renovations included reconstructing the escalators visible from the outside. Still, the retailer Calvin Klein opened a new store in the mall in early 2008.

A food court formerly operated at the mall until 2014, when it was closed. Uniqlo opened one of its first Southern California locations in the space.

The Beverly Center had many dining options, but most of the restaurants that occupied the street level have closed. Grand Lux Cafe closed its only California restaurant in 2013. Later in 2015, The Capital Grille, which opened in the former Hard Rock Cafe space in 2012, closed. In January 2016, P.F. Chang's shuttered its restaurant at the mall. Later that year, California Pizza Kitchen closed and Chipotle moved to a new pad at the corner of Beverly Boulevard and Croft Avenue. As part of renovations starting in 2016, the mall aims to bring restaurants back to the empty spaces on the street level.

Starting in March 2016, the Center underwent a major renovation that aimed to add a food hall and several new street-level restaurants and a skylight. Renovation costs were given as US$500 million. The new Center will also have a perforated steel facade on the outside of the building and an upgraded parking structure which will include technology to help drivers remember where they've parked.

On September 28, 2019, French luxury brand Kenzo opened on the 7th floor of the Beverly Center.

As many businesses were required to close during the COVID-19 pandemic, the landlord said tenants still needed to pay rent because of its own obligations to lenders and service providers.

All content from Kiddle encyclopedia articles (including the article images and facts) can be freely used under Attribution-ShareAlike license, unless stated otherwise. Cite this article:
Beverly Center Facts for Kids. Kiddle Encyclopedia.