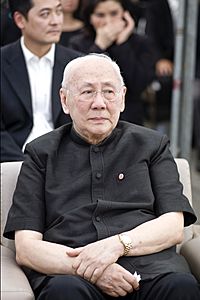 Bhichai Rattakul (Thai: พิชัย รัตตกุล, RTGS: Phichai Rattakun; born 16 September 1927) is a Thai politician. He served as the Thai deputy prime minister between 1983 and 1990 and again from 1997 to 2000. He was the Speaker of the House of Representatives and President of the National Assembly in 2000. He served as the leader of the Democrat Party from 1982 to 1991. He was also world president of Rotary International between 2002 and 2003.

All content from Kiddle encyclopedia articles (including the article images and facts) can be freely used under Attribution-ShareAlike license, unless stated otherwise. Cite this article:
Bhichai Rattakul Facts for Kids. Kiddle Encyclopedia.