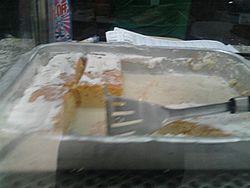 Bienmesabe (Spanish: "it tastes good to me") is a sweet Spanish dessert prepared with honey, egg yolk, and ground almonds as primary ingredients. Its consistency significantly varies depending upon preparation methods used. The dessert is also popular in the cuisine of the Canary Islands. It has been described as influenced by Moorish cuisine. Several variations of the dessert exist. 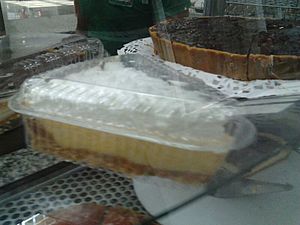 Honey, egg yolk and ground almonds are primary ingredients in the preparation of bienmesabe, and some versions are prepared using sugar. Additional ingredients may include lemon zest, cinnamon and sweet wine or sherry.

Bienmesabe's consistency varies greatly depending upon preparation methods, and can vary from the consistency of a sticky sauce thick cream or meringue to a custard or cake. Well-chilled versions may have a toffee-like consistency. As a sauce, bienmesabe is sometimes served poured over ice cream.

Bienmesabe is a popular dessert in the cuisine of the Canary Islands, where it is served with cat's tongue cookies. The cookies may be served on the side or crushed and served atop the dessert. On the Canary Islands, the dish may also include rum. It has been described as the "most famous" dessert in Canarian cuisine.

Bienmesabe a traditional Spanish dessert has been described as being influenced by the cuisine of the Moors.

In Puerto Rican cuisine, bienmesabe is a sweet syrup prepared using coconut milk, egg yolk, rum and sugar. It is used poured atop dishes such as ladyfingers, sponge cake, and okra.

Bienmesabe antequerano is prepared in a marzipan cake form, which has a soft texture and is topped with sugar.

In Venezuelan cuisine, bienmesabe is a traditional cake prepared using coconut and liqueur. A sweet sponge cake version that is soaked in a mixture of egg yolks and coconut milk exists as well.

All content from Kiddle encyclopedia articles (including the article images and facts) can be freely used under Attribution-ShareAlike license, unless stated otherwise. Cite this article:
Bienmesabe Facts for Kids. Kiddle Encyclopedia.