Canarian cuisine refers to the typical dishes and ingredients in the cuisine of the Canary Islands, and it constitutes an important element in the culture of its inhabitants. Its main features are its freshness, variety, simplicity, and the richness of its ingredients (which may be a result of the long geographical isolation the islands suffered), the mix of seafood and meat dishes, its cultural influences and the low knowledge of it by the rest of the world. Canarian cuisine is influenced by other cultures, specially the aboriginal inhabitants of the islands (Guanches) and Latin American cuisine (specially after the 20th-century Canarian migration to Latin America). 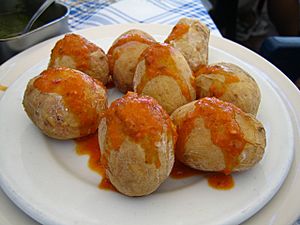 Many small dishes are presented in the Canary Islands as appetizers, or snacks (tapas), which are known locally as enyesques.

Mojo (pronounced mO-ho) is a sauce served with many dishes, which is made mainly of oil, garlic, vinegar, salt, red pepper, thyme, cumin, coriander and several other spices. The two main kinds are mojo rojo (red, often served with meat) and mojo verde (green, often served with fish), though both can be served with potatoes. The spicy red type is called mojo picón. This recipe is the base of the mojos of Latin America, especially Cuba, Dominican Republic, Puerto Rico, and Venezuela, due to heavy Canarian emigration, and have also influenced the cuisines of the non-Hispanic Caribbean islands.

Papas arrugadas (literally, "wrinkly potatoes", as a reference to the look of their cooked skin) are small unskinned potatoes which have been boiled in salt water and served with mojo.

One very typical Canarian product is gofio, a flour created by grinding roasted sweetcorn, which used to be the staple food for the local population for centuries. Gofio is produced locally and is added to many foods. For instance, it can be mixed with warm milk to be drunk in the morning, as well as made into a dough-like food called pella that can be eaten alongside meals. Gofio can also be stirred with fish broth and onions to create a dish called gofio escaldado or escaldón de gofio.

Local varieties of cheese are popular and numerous, specially goat cheese. Cheeses from both La Palma and Fuerteventura are protected by the Denominación de Origen label. Other notable cheeses are the Flor de Guía cheese and the queso tierno (tender cheese). Hard cheese is made into a paste called Almogrote on La Gomera island. Grilled cheese with mojo is sometimes served as a starter.

Traditional Canarian meals usually start with soup, in order to prepare the stomach for the meal. Among the best-known soups are: 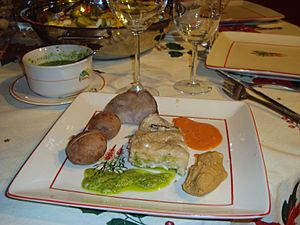 Waters around the Canary Islands are rich with a great variety of autochthonous fish. These can be prepared in many ways, including oven-roasted (sometimes covered in a salt bed), fried, and marinated in various sauces. Some preparations include:

The most widely consumed meats are pork, chicken, rabbit and goat.

Canarian desserts often use simple ingredients, such as cane sugar, honey, matalahuga or matalauva (anise), almonds and traditional miel de palma (especially on the island of La Palma). Among the desserts are bienmesabe (literally, a contraction of the Spanish phrase that means 'tastes good to me'), which is a paste of almonds, honey and sugar often served with ice cream or cream and cat's tongue cookies. Frangollo is a mix of corn flour, sugar, almonds and raisins, while truchas are pastries (filled with sweet potato paste or cabell d'angel, for instance) that are prepared at Christmastime.

Tropical fruits, especially bananas, are widely grown and consumed in the islands, even if they are not native species.

The wine from the malvasia grape was a product of Canarian export since the 17th century, immediately after the decline of sugar plantations and until its commerce was blocked by the British Royal Navy in the late 18th century. Nowadays the islands produce ten protected geographical indications. Canarian Denominación de Origen wines are:

Licor 43 is not made on the Canary Islands, but is an ingredient commonly used to make the barraquito/zaperoco, a multilayered drink made of Licor 43, coffee, condensed milk and frothed milk.

All content from Kiddle encyclopedia articles (including the article images and facts) can be freely used under Attribution-ShareAlike license, unless stated otherwise. Cite this article:
Canarian cuisine Facts for Kids. Kiddle Encyclopedia.