Kids Encyclopedia Facts
This page is about the lake. For the community, see Big Lake, Missouri. 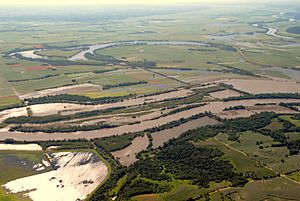 It is believed to have formed from the Missouri River sometime before Lewis & Clark visited the area in 1804. It is the largest oxbow lake in the state of Missouri.

Big Lake State Park, a 407-acre (1.6 km2) state park was established on the lake's northeast side in 1932. The State Park also includes the largest marsh in a state park in Missouri. The remaining two-thirds of the lake shore is occupied by privately owned cabins and residences. The lake is also known for being very shallow (usually only five feet) in most areas. Residents say you can walk across the lake if you are careful. The only known major deep spot in the lake is under the railroad trussel at the south side of the lake. This spot is almost 30 feet deep. The majority of the lake's fish reside here in winter.

All content from Kiddle encyclopedia articles (including the article images and facts) can be freely used under Attribution-ShareAlike license, unless stated otherwise. Cite this article:
Big Lake (Missouri) Facts for Kids. Kiddle Encyclopedia.