The resort was founded by Montana native Chet Huntley, the retired co-anchorman of The Huntley–Brinkley Report of NBC News. Big Sky opened in December 1973, with its main base area at an elevation of 7,510 ft (2,290 m) above sea level, on the eastern face of the 11,167-foot (3,404 m) Lone Mountain, the sixty-seventh highest mountain in Montana, and the seventh-highest mountain in the state outside of the Beartooth Range.

The first three lifts installed included a gondola and two chairlifts. The enclosed gondola carried four skiers per cabin, and climbed 1,525 feet (465 m) to an elevation of 9,040 ft (2,755 m). The nearby Lone Peak triple chairlift provided the lift-served maximum of 9,800 ft (2,985 m), unloading at the bowl 1,366 ft (416 m) beneath Lone Mountain's summit, providing a vertical drop of just under 2,300 ft (700 m), and the Explorer double chair served novice terrain just above the base. The fourth lift was the Andesite double, which climbed the north face of adjacent Andesite Mountain to 8,700 ft (2,650 m); it was renamed Ram's Horn in 1978, and replaced with the Ramcharger high speed quad in 1990.

Boyne Resorts purchased the resort in 1976, following Huntley's death from cancer in March 1974, and the decision of owner Chrysler Corporation to divest its real estate development assets. 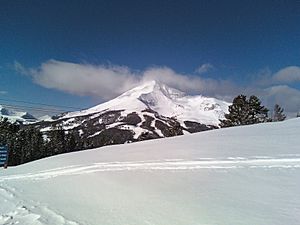 Lone Peak, the top of the resort mountain

The resort grew steadily over the following decades, adding lifts and more than tripling the terrain available for skiing and snowboarding. The fifth lift, a second chairlift on Andesite Mountain, was installed in the summer of 1979. The Mad Wolf double climbed Andesite's eastern face and lowered Big Sky's minimum elevation 540 ft (165 m) to 6,970 ft (2,125 m). This increased the area's vertical drop to over 2,800 ft (855 m). The Mad Wolf lift was replaced with the Thunder Wolf high speed quad in 1994.

Two lifts were added in the 1980s, Gondola Two was installed in parallel to the first gondola, and the Challenger double chair served upper-elevation expert terrain on the north edge of the ski area. A tow was later added above this lift. Gondola Two was replaced with a Doppelmayr high speed quad, Swift Current 4, in 1997. The eighth lift at Big Sky was the Southern Comfort on the south side of Andesite Mountain, a Heron-Poma triple chairlift acquired from Copper Mountain in Colorado, installed in 1990 and upgraded to a high speed quad for the 2004-2005 ski season.

In the fall of 1995, Big Sky installed the Lone Peak Tram to provide access to expert terrain from the 11,166-foot (3,403 m) Lone Mountain summit. The Shedhorn double chair was also part of this expansion, installed in 1995 on the lower south face of Lone Mountain.

In 1990 the Shoshone Condominium Hotel and the Yellowstone Conference Center were built.

In April 2000, Boyne Resorts announced that an estimated $400 million in improvements would take place over the next ten years to the Mountain Village and the ski area. Later in 2000, the $54 million Summit Hotel was completed. In late 2007, the $25 million Village Center Complex was opened.

In 2007, Big Sky expanded the skiing opportunities on the south face of Lone Peak with the reinstallation of the original Southern Comfort triple chairlift as the Dakota chairlift on the south side of Lone Peak, providing access to the accompanying out-of-bounds sidecountry, Dakota Territory. Gondola One was retired in the summer of 2008, dismantled due to the rising cost of repairs.

In 2018, as part of the Big Sky 2025 plan, Doppelmay built North America's first ever high speed eight pack in the form of the Ramcharger 8, which replaced an existing Doppelmayr high speed quad from the base area to the summit of Andesite Mountain and has many of the same features as Powder Seeker. Billed as "the most technologically advanced lift ever built," it opened on December 15, 2018. That same season, the original Ramcharger high speed quad was relocated to the south side of Lone Peak where it replaced the Shedhorn double chairlift.

on the mountain. Golf and horseback riding are available near the Meadow Village at an elevation of 6,300 feet (1,920 m), between the ski area and US-191. 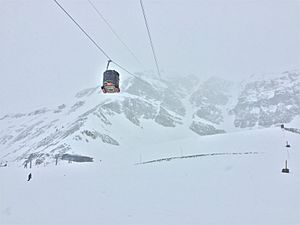 The Lone Peak Tram is an aerial tramway at the Big Sky Resort that begins at the top of the Powder Seeker chairlift and unloads at the summit of Lone Mountain at 11,166 ft (3,403 m). Opened in the fall of 1995, the 15 passenger cab climbs 1,420 ft (433 m) over a distance of 2,828 ft (862 m), with two cabs traveling in opposite directions. It provides access to the most difficult terrain at Big Sky Resort, including former Moonlight Basin terrain. Construction was completed by the high-altitude construction firm Matrix, based in Alaska. Starting in the summer 2012 season, Big Sky Resort introduced daily summer tram rides to take visitors to the top of Lone Peak, called The Lone Peak Expedition.

All content from Kiddle encyclopedia articles (including the article images and facts) can be freely used under Attribution-ShareAlike license, unless stated otherwise. Cite this article:
Big Sky Resort Facts for Kids. Kiddle Encyclopedia.