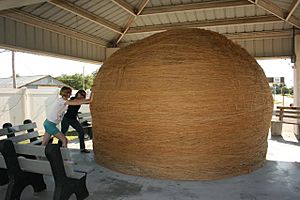 There are multiple claims to the world's biggest ball of twine record in the United States. As of 2014, the ball of twine with the largest circumference is located in Cawker City, Kansas.

Largest ball of sisal twine built by a community

Largest ball of sisal twine built by a single person 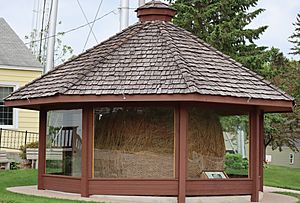 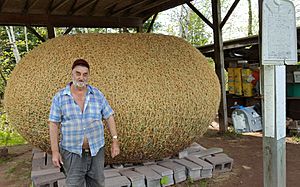 In Lake Nebagamon, Wisconsin, James Frank Kotera claims to have made the heaviest ball of twine ever built. He started it in 1979 and is still working. Kotera estimates, by measuring the weight of each bag of twine that he winds on, that the ball weighs 8,770 kg (19,336 pounds), making it the heaviest ball of twine ever built. The ball is housed in an open-air enclosure in Kotera's lawn. The ball has a smaller companion, "Junior", that is made of string.

In Branson, Missouri, a ball of nylon twine built by J. C. Payne of Valley View, Texas, is on display in Ripley's Believe It or Not museum. The ball, which measures 41.5 feet (12.6 m) in circumference, was certified as the world's largest ball of twine by the Guinness Book of World Records in 1993. It is, however, the lightest of the four contenders, weighing 12,000 pounds.

All content from Kiddle encyclopedia articles (including the article images and facts) can be freely used under Attribution-ShareAlike license, unless stated otherwise. Cite this article:
Biggest ball of twine Facts for Kids. Kiddle Encyclopedia.