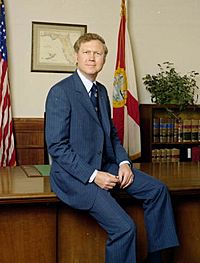 William Dawson "Bill" Gunter Jr. (born July 16, 1934) is an American politician. He was born in Jacksonville, Florida. Gunter was a member of the Democratic Party. Gunter represented Florida in the United States House of Representatives from the 5th district from 1973 through 1975.

From 1976 through 1989, Gunter was Treasurer, Insurance Commissioner, and Fire Marshal of Florida. He unsuccessfully ran for the Democratic rally for the United States Senate three times, all were failed candidacies.

All content from Kiddle encyclopedia articles (including the article images and facts) can be freely used under Attribution-ShareAlike license, unless stated otherwise. Cite this article:
Bill Gunter Facts for Kids. Kiddle Encyclopedia.