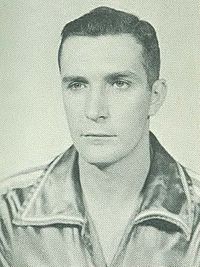 William Marion "Bill" Hougland (June 20, 1930 – March 6, 2017) was an American basketball player and businessman. He competed in the 1952 Summer Olympics and in the 1956 Summer Olympics. He was also a member of the Kansas Jayhawks' 1952 NCAA Men's Basketball National Championship team.

After his sports career, Hougland served as Vice-President of Koch Industries until his retirement in 1991.

Hougland was born in Caldwell, Kansas. He studied at the University of Kansas. Houghland died on March 6, 2017 in Lawrence, Kansas, aged 86.

All content from Kiddle encyclopedia articles (including the article images and facts) can be freely used under Attribution-ShareAlike license, unless stated otherwise. Cite this article:
Bill Hougland Facts for Kids. Kiddle Encyclopedia.