The Billy Ireland Cartoon Library & Museum is a research library of American cartoons and comic art affiliated with the Ohio State University library system in Columbus, Ohio. Formerly known as the Cartoon Research Library and the Cartoon Library & Museum, it holds the world's largest and most comprehensive academic research facility documenting and displaying original and printed comic strips, editorial cartoons, and cartoon art. The museum is named after the Ohio cartoonist Billy Ireland. 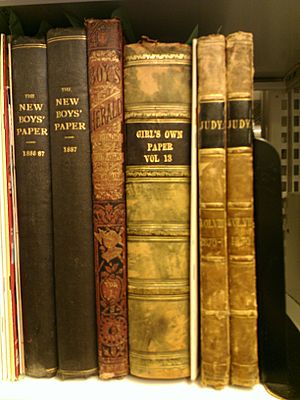 The Cartoon Library began in 1977 when the Milton Caniff Collection was donated to Ohio State and delivered to the School of Journalism, which was headed by Lucy Shelton Caswell, who became the Milton Caniff Reading Room first curator. Interviewed by Matt Tauber, Caswell detailed the museum's origins and how she became involved:

From two classrooms off the back hallway of the Journalism Building in 1977, the collection expanded to three classrooms and became part of the University Libraries. By 1989, the three classrooms were filled, and the library moved into a larger space, eventually requiring the use of off-site storage as the collection continued to expand. (At that point, the facility was named the Cartoon Research Library.)

In 1998, the San Francisco Academy of Comic Art Collection was acquired from its director, Bill Blackbeard, giving the library the largest collection of newspaper comic-strip tear sheets and clippings in the world. Six semitrailer trucks transported this collection from California to Ohio.

In June 2008, the collection of the International Museum of Cartoon Art (more than 200,000 originals with an estimated value of $20 million) was transferred to the Cartoon Library & Museum. Founded in 1973 by cartoonist Mort Walker, the IMCA collection includes a wide variety of original cartoon art (comic strips, comic books, animation, editorial, advertising, sport, caricature, greeting cards, graphic novels, and illustrations), display figures, toys, and collectibles, plus works on film and tape, CDs, and DVDs. The 2009 exhibition From Yellow Kid to Conan: American Cartoons from the International Museum of Cartoon Art Collection was held at the Cartoon Library and Museum from June to August.

In September 2009, it was announced that the Ohio State University Board of Trustees approved a new name, Billy Ireland Cartoon Library & Museum, in recognition of a $7 million gift from an anonymous donor to support the renovation of Sullivant Hall. The museum was named in honor of William Addison Ireland (1880 – May 29, 1935), a self-taught cartoonist (and native of Chillicothe, Ohio) well known throughout Ohio as Billy Ireland. A native of Chillicothe, Ohio, Billy Ireland was a self-taught cartoonist who was hired by The Columbus Dispatch shortly after his 1898 high school graduation. Until his death, Ireland worked in Columbus for the Dispatch, drawing both editorial cartoons and his Sunday feature, The Passing Show. His work was exhibited by the museum in 2003. 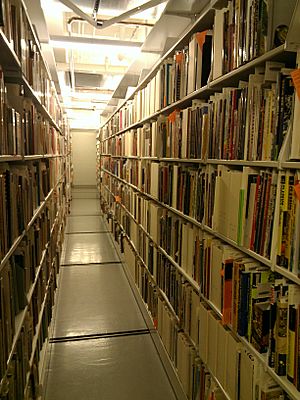 An aisle of stored comics

The Milton Caniff Collection consists of 12,000 original artworks by Caniff, 85 boxes of memorabilia, and more than 450 boxes of manuscript materials, fan letters, and business records.

The museum's collection includes work by Anne Mergen, who was the only female editorial cartoonist in the United States for much of her career.

The library sponsors programs related to cartoon art by staging exhibitions, lending for exhibits elsewhere, and hosting speakers, seminars, workshops and conferences. Some physical exhibitions have been made available as digital exhibitions. 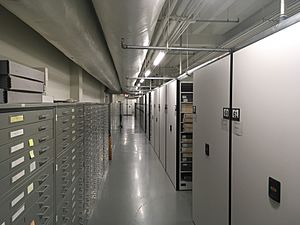 Storage space of the museum

Caswell remained as curator from 1977–2010. She is author of several books on cartooning, including Illusions: Ethnicity in American Cartoon Art (Ohio State Libraries, 1992) and Arnold Roth: Free Lance (Fantagraphics, 2001).

Jenny E. Robb became the museum's new curator on January 1, 2011, following the December 31, 2010, retirement of Caswell, who returned as curator of special projects in March 2011. Before arriving at Ohio State in 2005, Robb was curator of the Cartoon Art Museum in San Francisco for five years. She has master's degrees in history and museum studies from Syracuse University. Wendy Pflug joined the staff as associate curator in December 2011. Associate Curator and Assistant Professor Caitlin McGurk, who started as a Visiting Curator in February 2012, manages the libraries outreach efforts, including instruction, exhibits, tours, and social media.

Other staffers include Assistant Curators Susan Liberator and Marilyn Scott.

In May 2010, the Ohio State University Press announced Studies in Comics and Cartoons, a series of books edited by Caswell and Jared Gardner, associate professor in the Department of English. Books published in this series will focus on comics and graphic literature with monographs and edited collections covering the history of comics and cartoons from the editorial cartoon and early sequential comics of the 19th century through contemporary international comics and online comics.

In 2017, the Ohio State University Press began publishing Inks, a new journal for the Comics Studies Society. This journal is published triannually, and "features scholarly research on sequential art, graphic narrative, and cartooning.

Expansion for the Billy Ireland Cartoon Library and Museum included the renovation of historic Sullivant Hall located on High Street adjacent to the Wexner Center for the Arts. The facility increased the library’s space from 6,808 square feet (632.5 m2) to more than 40,000 square feet (3,700 m2). It features a reading room for researchers, three museum-quality galleries, and expanded storage space with state-of-the-art environmental and security controls.

In May 2009, Jean Schulz, widow of Charles M. Schulz, made a donation of $1 million with a promise of a matching grant if more funds were raised for the renovations. Her challenge was that she would provide an additional gift of $2.5 million if Ohio State raised the same amount from other sources to reach a $6 million total. Cartoonist Bil Keane and his family answered the Schulz Challenge with a $50,000 gift.

The $20.6 million project was completed in 2013, with Sullivant Hall housing both the Billy Ireland Cartoon Library & Museum and Ohio State's Department of Dance. 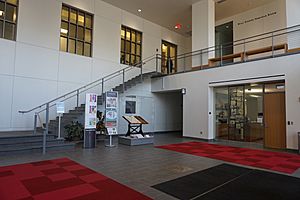 Select collections have been digitized and are available as part of the library's Digital Exhibits collection.