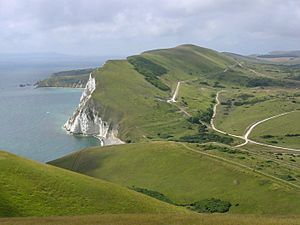 Bindon Abbey (Bindonium) was a Cistercian monastery, of which only ruins remain, on the River Frome about half a mile east of Wool in the Purbeck District, Dorset, England.

The monastery was founded in 1149 by William de Glastonia on the site since known as Little Bindon near Bindon Hill on the coast near Lulworth Cove as a daughter house of Forde Abbey, but the terrain proved too demanding to sustain the community. In 1172 the monastery moved to a site near Wool, the gift of Roger de Newburgh and his wife, Matilda de Glastonia (the granddaughter of the original founder), who also endowed it with further estates in the county. The monastery retained the name of its original location.

The abbey had the support of the Plantagenet kings, and Henry III granted several letters of protection.

From the 14th century the abbey suffered from a number of internal and economic difficulties which seriously reduced its income and wealth. In the Valor Ecclesiasticus of 1535 its annual income was valued at £147. It was scheduled for Dissolution in 1536, but John Norman, the then abbot, paid the Crown the enormous sum of £300 to save it. The abbey was nevertheless suppressed in 1539.

The site was granted to Thomas Poynings, Baron Poynings, from whom it passed to Thomas Howard, Viscount Howard of Bindon. It was bought in 1641 by the Weld family, later prominent as Roman Catholics, the present landowners.

In 1559 Thomas Howard built a country house on the site of the monastery, but this was burnt down during the English Civil War, although the outline of Howard's gardens, with their moated water features, can still be seen. The Welds reused the stone for the construction of the nearby Lulworth Castle.

The foundations of the monastery and the surviving walls show that it followed the standard Cistercian layout of a cruciform church with a nave and two side aisles and a straight east end, with two chapels off each arm of the transept; the conventual buildings lay to the south of the church. Most of the construction seems to have taken place around the turn of the 12th and 13th centuries; although later records refer to royal gifts of timber for rebuilding works, these are no longer in evidence. In the chapter-house in the east range the recessed shafts of the columns that supported the ceiling vaulting are still to be seen. Little remains of the south range with the kitchen and refectory.

Access to the ruins is by permission of the current tenants. 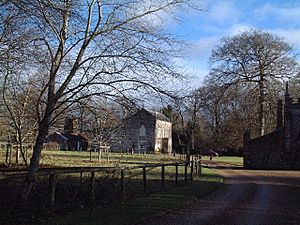 Between 1794 and 1798 a small "Gothick" house, Bindon Abbey House, was built on part of the former abbey grounds. This and a contemporaneous gatehouse are still in existence. Bindon Abbey House is currently used by Bindon Abbey Wellness Retreat to provide a range of treatments and retreat days.

The mill on the River Frome – Bindon Mill – to the north of the ruins would originally have been part of the monastery. It was converted into a residence between 2006 and 2009.

All content from Kiddle encyclopedia articles (including the article images and facts) can be freely used under Attribution-ShareAlike license, unless stated otherwise. Cite this article:
Bindon Abbey Facts for Kids. Kiddle Encyclopedia.