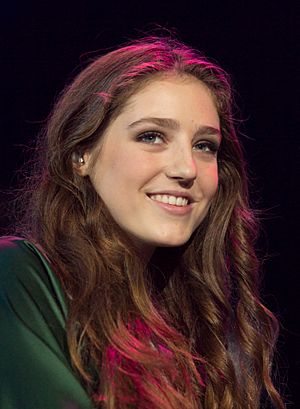 Jasmine van den Bogaerde (born 15 May 1996), also known by her stage name Birdy, is an English musician. She was born in Lymington, Hampshire. She won the music competition Open Mic UK in 2008, at the age of 12. Her version of Bon Iver's "Skinny Love" was successful, peaking inside the top twenty of the charts in her native United Kingdom and in some other European countries. Her eponymous first album Birdy was released on 7 November 2011. the album peaked at No. 13 in the UK and in the top 5 in France, Belgium and the Netherlands and number 1 in Australia. Her second album Fire Within was released 23 September 2013 in the UK. She is the great-niece of Dirk Bogarde.

All content from Kiddle encyclopedia articles (including the article images and facts) can be freely used under Attribution-ShareAlike license, unless stated otherwise. Cite this article:
Birdy (musician) Facts for Kids. Kiddle Encyclopedia.