The black-chinned sparrow (Spizella atrogularis) is a small bird in the New World sparrow family Passerellidae. It is found in the southwestern United States and throughout much of Mexico north of the Isthmus of Tehuantepec; most populations in the US migrate south after breeding while those in Mexico are resident. It is a slim, long-tailed bird, primarily gray with a rufous back streaked with black, brown wings and tail, a pink beak, and brownish legs and feet. In the breeding season, the male shows black on his throat, chin, and the front of his face. Females, youngsters and nonbreeding males show little or no black in these areas. An unobtrusive bird, it spends much of its time foraging slowly along the ground, either alone or in small parties, sometimes mixing with other Spizella species. It is an omnivore, feeding primarily on seeds during the winter and insects during the summer. It builds a cup-shaped nest of grasses, rootlets, or plant fibers, into which the female lays 2–5 pale blue eggs. The female does most or all of the egg incubation, but both parents feed the hatched nestlings.

The species was first described by Jean Louis Cabanis in 1851. Four subspecies have been identified: one breeds only in the US, one only in Mexico, and the other two breed in both countries. Most northern populations move south—primarily into Mexico—for the winter. Because of its apparently large population size and huge range, it is considered to be a species of least concern. However, increasing global temperatures could have a significantly negative impact its numbers.

German ornithologist Jean Louis Cabanis first described the black-chinned sparrow in 1851, using a specimen which was probably collected near Mexico City. He called it Spinites atrogularis. Within the decade, most authorities had moved it to the genus Spizella, where it has remained since. It is one of six small New World sparrows in the genus, and is known to have hybridized with Brewer's sparrow, a congener. Mitochondrial DNA studies have shown that the field sparrow is its closest relative. There are four recognized subspecies:

The genus name Spizella is a diminutive of the Ancient Greek word spiza, meaning "finch". The species name atrogularis is a combination of the Latin ater, meaning "black" and gularis, meaning "-throated" (from gula, meaning "throat"). The common name "sparrow" is an English word which was in use prior to the 12th century. Though originally used for the house sparrow, a common European species, its usage expanded to the unrelated New World sparrows because of their similar appearance.

The black-chinned sparrow is a small passerine, measuring 5.0–5.8 in (13–15 cm) in length, with a wingspan of 7.75 in (19.7 cm). It weighs 0.32–0.52 oz (9.0–14.8 g), with a median weight of 0.40 oz (11.3 g). Overall, it is a slender, round-headed bird, with a high crown and a long, notched tail. The tail is proportionately longer than that of other Spizella sparrows. The sexes are similar, though the male averages slightly larger. The adult's head and body are gray, and its back is reddish-brown with black streaks. It has a "poorly defined" whitish belly, and its rump and uppertail coverts are an unstreaked gray. The feathers in its wings and tail are dark brown with paler edges (white in the tail). In alternate plumage (during the breeding season), the male has extensive black on its chin, throat and the front of its face. It loses most or all of this black during the nonbreeding season; the oldest males may retain some black flecking. The female has little or no black on her face, chin, or throat at any point during the year. In basic plumage, males and females can be difficult to tell apart. The juvenile resembles a basic-plumaged adult, but shows indistinct streaking on its underparts, and two faint wingbars. The head and underparts have a brownish wash, and its outer scapulars are tawny-colored. The legs and feet are dark brown or dusky, and the bill is small, stout, and pink.

Its call is a high, soft tsip or stip. In flight it gives a soft ssip, a call said to resemble that of the chipping sparrow. It has two song types. The song is a series of clear, high-pitched whistles that accelerate into a rapid trill, which typically rises in pitch. Though similar to the song of the field sparrow, it is said to be higher-pitched and more "mechanical". 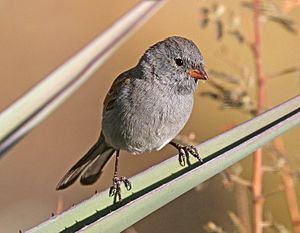 Females, youngsters, and nonbreeding males show few or no black markings on the head, chin and throat.

The combination of gray head and body is unique among New World sparrows. Though similar in plumage to the dark-eyed junco and the gray-headed junco, the black-chinned sparrow is slimmer, and has no white in the tail.

The black-chinned sparrow breeds in the southwestern United States and throughout much of Mexico north of the Isthmus of Tehuantepec. It is regularly found from northern California east to western Texas, and as far north as southern Nevada and Utah.. It has occurred as a vagrant or occasional breeder in Oregon and Colorado.

It is a species of arid and semi-arid places, living in chaparral, sagebrush, pine-juniper woodlands, and other brushy shrubland. 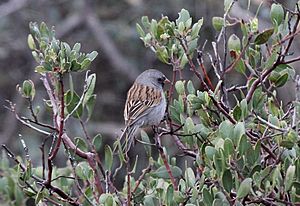 Although the black-chinned sparrow appears to be relatively common where it occurs, it is an inconspicuous species that can be easy to overlook. In Mexico, it is generally found singly or in pairs, and only rarely in small groups. In the United States, it often found in small, loose groups, sometimes mingled with Brewer's or chipping sparrows. It stays close to the ground in flight, with an undulating flight style. Though the species often remains in deep cover, males do pick conspicuous, exposed perches from which to sing.

It forages on or near the ground, spending considerable time working in the same area. Though its diet is not well-known, it appears to feed primarily on seeds in the winter, and insects in the summer. During the breeding season, it is a ground-foraging omnivore, while in the winter it is a ground-gleaning granivore.

Much of the breeding ecology of the black-chinned sparrow is poorly known. It breeds from late April into May. The nest is a shallow, open cup built of plant material, including grasses, weed stems, rootlets or yucca fibers. This is lined with fibers or fine grasses, and occasionally with hair or feathers. It is located within 4 ft (1.2 m) of the ground. The sparrow is one of many species parasitized by cowbirds.

The female lays 2–5 very pale blue eggs. These are typically unmarked, though occasionally speckled with brown spots. Incubation takes roughly 13 days, and is primarily (or possibly completely) done by the female. Both parents provide food for the hatched nestlings. The time that it takes for the young to fledge is unknown.

The overall population of the black-chinned sparrow has not been quantified, but its numbers are known to be decreasing. It is considered a "Bird of Conservation Concern" by the US Fish and Wildlife Service. However, it is thought to have a substantial population covering an enormous range. Therefore, the International Union for Conservation of Nature considers it to be a species of least concern.

The black-chinned sparrow is known to carry several blood parasites, including members of the genera Haemoproteus and Trypanosoma. Specimens carrying West Nile virus have been found dead. Garter snakes are known nest predators.

All content from Kiddle encyclopedia articles (including the article images and facts) can be freely used under Attribution-ShareAlike license, unless stated otherwise. Cite this article:
Black-chinned sparrow Facts for Kids. Kiddle Encyclopedia.