It was included within The Blue Fairy Book by Andrew Lang, Scottish Folk Tales by Ruth Manning-Sanders, and A Book Of British Fairytales by Alan Garner. J. R. R. Tolkien cited it in the essay "On Fairy-Stories" as the example of a "eucatastrophe".

It is Aarne–Thompson type 425A, the search for the lost husband. Others of this type include The King of Love, The Brown Bear of Norway, The Daughter of the Skies, East of the Sun and West of the Moon, The Enchanted Pig, The Tale of the Hoodie, Master Semolina, The Sprig of Rosemary, The Enchanted Snake, and White-Bear-King-Valemon.

A washerwoman's three daughters each in succession ask her to cook them some food to take with them on a journey to seek their fortune. Along their way, they consult a witch on how to seek the fortune. The woman advised them to look out her back door. On the third day, the eldest sees a coach-and-six come for her and leaves with it, delighted; the second daughter finds a coach-and-four and leaves; but the third and youngest finds only a black bull, which the witch tells her she must accompany.

The daughter is terrified but goes off with the bull, who surprises her by being kind and gentle. When she grows hungry, he tells her to eat out of his right ear, and drink out of his left. The first night of their journey, they arrive at a castle, which, the bull tells the girl, belongs to his eldest brother. The daughter is welcomed and treated lavishly. As a parting gift, she is given a beautiful apple and told to never use it until she comes to the first great need of her life, and then it would help her. The second night of the journey, they once more stay at a castle, this one belonging to the bull's second brother. Once more the daughter receives a parting gift: a beautiful pear that she is not to use until the second great need of her life; the third night, they are hosted at the youngest brother's castle, and the daughter is given a final gift of a beautiful plum, not to be used until the third great need of her life. At last, the girl and the bull arrive at a valley of glass.

"You must wait here," the bull tells the girl, "and whatever you do, do not move, even an inch, or I will not be able to find you". He goes on to explain that he is to fight the devil who rules the valley so that they may exit. If the sky turns blue, then she will know that the bull has won; but if the sky turns red, then he has lost. The black bull leaves the girl there, and after some time she sees the sky turn blue. Overjoyed, the girl shifts her position slightly... and so the black bull does not return for her.

Unable to climb out of the valley on her own, the girl wanders alone until she finds a blacksmith. He tells her that if she serves him for seven years, he will repay her by making her a pair of shoes. When seven years have gone by, the blacksmith, true to his word, makes the girl—now a young woman—a pair of iron shoes, and nails them to her feet. With the shoes, the young woman is able to climb out of the glass valley.

The young woman eventually wanders back to the home of the witch, who offers her shelter if she will wash some bloody shirts that both she and her daughter have been unable to clean. Whoever could clean the shirts would marry the gallant young knight staying at the witch's home, whom the shirts belong to. Despite the failure of those before her, no sooner has the young woman touched the soap to the shirts than the bloodstains vanish, and the young woman's feet heal perfectly, as if they had never been bloodied or injured. Delighted, the witch brings the knight his shirts and convinces him that it was her daughter who cleaned them. Thus, the knight and the daughter are to be married. 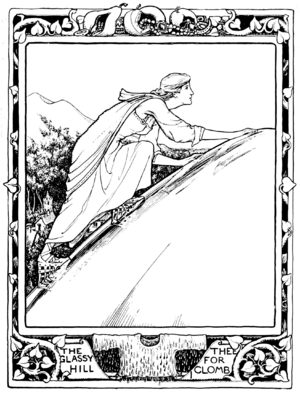 Desperate, the young woman realizes that she is in the first great need of her life. She breaks open the apple, and finds it full of rich jewelry. She offers the jewelry to the witch's daughter, in exchange for being allowed to sing outside the knight's room at night. But the witch gives her daughter a sleeping-drink to offer the knight, so the young woman cannot wake him, though she sobs and sings:

"Seven long years I served for thee,
The glassy hill I clamb for thee,
Thy bloody clothes I wrang for thee;
And wilt thou not waken and turn to me?"

She is in the second great need of her life, so she tries the pear, and finds it full of jewelry richer than that of the apple, but the second night goes as before. Finally, the young woman is in the third great need of her life, and breaks the plum to find the richest jewelry yet. This time, though the sleeping-drink is brought again, the knight accidentally knocks it over, so, when the young woman buys her third and final chance, the knight is awake to hear her song. In this way he learns the truth.

The young woman marries the knight, who had been her black bull all along. He has the witch and her daughter burned, and the knight and the washerwoman's youngest daughter live happily ever after.

English scholar James Orchard Halliwell published another story, titled The Bull of Norroway, in his Popular Rhymes and Nursery Tales, and commented that it was a modern version of the "very old tale" Black Bull of Norroway, mentioned in The Complaynt of Scotland (1548).

Folklorist Joseph Jacobs also remarked on its mention in The Complaynt of Scotland and in Phillip Sidney's Arcadia.

All content from Kiddle encyclopedia articles (including the article images and facts) can be freely used under Attribution-ShareAlike license, unless stated otherwise. Cite this article:
Black Bull of Norroway Facts for Kids. Kiddle Encyclopedia.