Black Butte Ranch is a census-designated place (CDP) and unincorporated private resort community in Deschutes County, Oregon, United States. It is located in the Cascade Range, 8 miles (13 km) northwest of Sisters. The population was 366 at the 2010 census. Black Butte Ranch allows public access to its restaurant, golf courses and horse stables, but is primarily oriented to its year-round residents and seasonal guests.

As of December 2013, the president and CEO of Black Butte Ranch is Scott Huntsman, and the chairman of the Board of Directors is Mark Pilkenton. 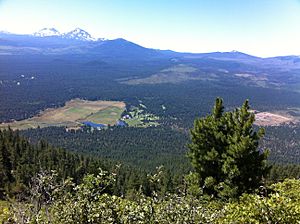 A view of the ranch from atop Black Butte

Black Butte Ranch is located in northwestern Deschutes County to the southwest of U.S. Route 20; it is surrounded by Deschutes National Forest. The 6,436-foot (1,962 m) summit of Black Butte overlooks the community to the northeast.

According to the U.S. Census Bureau, the CDP has a total area of 8.2 square miles (21.3 km2), of which 0.02 square miles (0.06 km2), or 0.29%, is water. The area drains east via Black Butte Swamp to Indian Ford Creek, then Squaw Creek, then to the Deschutes River, a north-flowing tributary of the Columbia River.

In 2001, the estimated population of full-time, year-round residents was 337. The population was 366 at the 2010 census. During the peak tourist season, the population, including guests who do not own property but are renting residences within the community, is estimated to rise to 5,000.

All content from Kiddle encyclopedia articles (including the article images and facts) can be freely used under Attribution-ShareAlike license, unless stated otherwise. Cite this article:
Black Butte Ranch, Oregon Facts for Kids. Kiddle Encyclopedia.