The Black Hills Ordnance Depot (BHOD) was a munitions storage and maintenance facility formerly operated by the Ordnance Corps of the United States Army. The depot was located in Fall River County, in far southwestern South Dakota about eight miles south of the town of Edgemont.

BHOD was established and constructed in 1942, to help meet the Army's increased ordnance handling needs caused by World War II. Because of the relative remoteness of the location, nearly all of the facility's civilian workforce lived in federally owned housing at the depot; this residential community was known as Igloo, a name derived because the characteristic shape of the munitions storage buildings constructed at the site has a similar appearance to igloos. The Igloo community included public schools, a hospital, post office, church, and shopping and entertainment facilities including a theater, swimming pool and a recreation center.

Among Igloo's residents was a young Tom Brokaw, who spent a few years living on the base as a boy.

The level of employment at BHOD varied over the years, increasing during periods of war. During typical peacetime periods of the 1950s, between 650 and 750 workers were employed at the site, and the community population was around 1800 people.

Over the years, BHOD was used for storage and testing of chemical weapons, including sarin and mustard gas. Additionally, during World War II, the site also held Italian prisoners of war.

The Depot was closed on June 30, 1967, and the Igloo community was abandoned. Once the Depot was closed, most of the residential housing units were moved to the Pine Ridge Indian Reservation. A large number of former Depot buildings remained at the site in 2007. 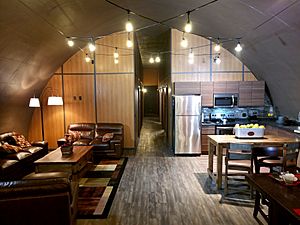 Since 2016, The Vivos group has purchased the majority of the former base containing 575 of the ordnance igloos, each approximately 2,200 square feet. The development now known as Vivos xPoint has become an international story and is currently in filming by a major cable network for an ongoing docu-series on the making of the world's largest survival community. When completed Vivos projects a total member population of over 5,000 people averaging 10 people per fully outfitted private bunker.

All content from Kiddle encyclopedia articles (including the article images and facts) can be freely used under Attribution-ShareAlike license, unless stated otherwise. Cite this article:
Black Hills Ordnance Depot Facts for Kids. Kiddle Encyclopedia.