Kids Encyclopedia Facts
This page is about the horse. For other uses, see Black Jack (disambiguation). 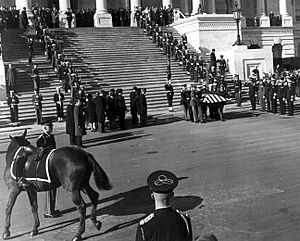 A coal-black Morgan-American Quarter Horse cross, Black Jack served in the Caisson Platoon of the 3rd U.S. Infantry Regiment (The Old Guard). Named in honor of General of the Armies John J. "Black Jack" Pershing, he was the riderless horse in more than 1,000 Armed Forces Full Honors Funerals (AFFHF), the majority of which were in Arlington National Cemetery. With boots reversed in the stirrups, he was a symbol of a fallen leader.

Black Jack was foaled January 19, 1947, and came to Fort Myer from the cavalry remount station at Fort Reno, Oklahoma, on November 22, 1952. Black Jack was the last of the Quartermaster–issue horses branded with the Army's U.S. brand (on the left shoulder) and his Army serial number 2V56 (on the left side of his neck).

Among the highlights were that he participated in four state funerals:

Black Jack died after a 29-year military career on February 6, 1976. He was cremated, with his remains laid to rest in a plot at Fort Myer, Virginia, on Summerall Field; his final resting place lies 200 feet (60 m) northeast of the flagpole in the southeast corner of the parade field. He is one of four horses in United States history to be buried with Full Military Honors, the others being Chief, Sergeant Reckless, and Comanche.

All content from Kiddle encyclopedia articles (including the article images and facts) can be freely used under Attribution-ShareAlike license, unless stated otherwise. Cite this article:
Black Jack (horse) Facts for Kids. Kiddle Encyclopedia.