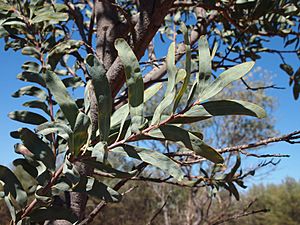 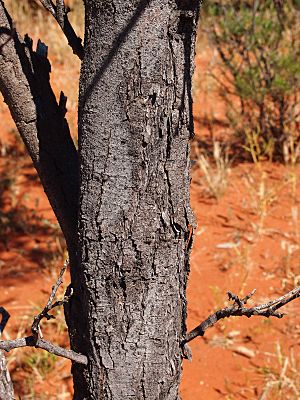 Acacia pruinocarpa, commonly known as black gidgee, gidgee or tawu, is a tree in the family Fabaceae that is endemic to arid parts of Australia.

The species was first formally described by the botanist Mary Tindale in 1968 as part of R.H. Anderson and Tindale's work Notes on Australian taxa of Acacia as published in Contributions from the New South Wales National Herbarium. It was reclassified as Racosperma pruinocarpum by Leslie Pedley in 2003 then transferred back into the genus Acacia in 2006. The species is often confused with, and misidentified as Acacia notabilis.

It is native throughout the arid centre of Australia, from Carnarvon, Western Australia, east to the Tanami Desert, Northern Territory and Mann Range, South Australia. It is especially common along watercourses and in low-lying areas that receive drainage. The tree is found in many types of habitat usually in stony sand or loamy soils and is associated with Acacia aneura and spinifex communities.

All content from Kiddle encyclopedia articles (including the article images and facts) can be freely used under Attribution-ShareAlike license, unless stated otherwise. Cite this article:
Black gidgee Facts for Kids. Kiddle Encyclopedia.