Blake Clark (born February 2, 1946) is an American stand-up comedian and actor whose trademark is a raspy voice similar to Jim Varney.

He is perhaps best known as Farmer Fran in The Waterboy. His other known role is as the voice of Slinky Dog in Toy Story 3, replacing Varney who died in 2000 (and, according to John Lasseter, Clark sounds an "awful lot like him"). It was revealed that Clark and Varney had known each other for a long time.

Clark was born in Macon, Georgia. He graduated from LaGrange College in 1969 with a degree in the performing arts.

A decorated Infantry Platoon Leader in the Vietnam War, Clark brought the plight of the Vietnam Veteran to the people of America in a humorous way in the 80's and was adopted by numerous Veteran Organizations throughout the United States. His personal quote is "I was born and raised in Georgia and fought in Vietnam. It was like being punished for the same thing twice. In fact, I used to have flashbacks in Vietnam." 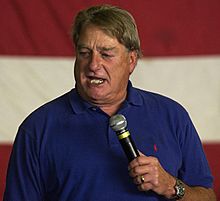 Having moved from his home state of Georgia to Hollywood, Clark soon landed his first Tonight Show with Johnny Carson and soon thereafter, was cast in his first of many recurring roles on Television as Fred the Chauffeur on Remington Steele. Since then, he has been Harry, Tim Taylor's friend on Home Improvement; Jules, the next-door neighbor on The Drew Carey Show; Chet Hunter, Sean's father on Boy Meets World, and Bob the womanizing boss on The Jamie Foxx Show. And he recently received critical acclaim as Drew Barrymore's father in the hit movie, 50 First Dates. He also acted as an umpire in the 2006 movie The Benchwarmers. He even came out in the 2008 movie Get Smart, starring Steve Carell and Anne Hathaway.

Clark has traveled the world doing comedy and recently went to Iraq for an extended USO Tour with Drew Carey. He is a warm, intelligent, funny, and innovative social commentator with a quiet patriotism that he lives as well as portrays. His comedy runs the gamut from observation on the current military conflict to his Southern root in Georgia. He is a man of all seasons.

Clark is a single father with one adopted son; Travis Clark, who is also a comedian.

All content from Kiddle encyclopedia articles (including the article images and facts) can be freely used under Attribution-ShareAlike license, unless stated otherwise. Cite this article:
Blake Clark Facts for Kids. Kiddle Encyclopedia.