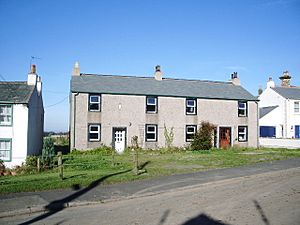 Blennerhasset derives from the Old Norse heysætr 'hay shieling', which has been added to a British place-name containing 'blaen', 'top'. The '-er-' part in the middle " is asserted by Ekwall on the supposition that the full first element corresponded to Welsh 'blaen-dre', 'hill farm' ".

Interpretations of Torpenhow have developed over time. In Place-Names of Cumberland (1950) Torpenhow was etymologized as "Tosti's howe" (with howe deriving from Old Norse haugr 'hill, mound'), against a tradition identifying the name as an example of tautology in place-names, first proposed by Denton (1688). Denton interpreted tor, pen and how as three elements all with the base meaning "hill". Ekwall's Concise Oxford Dictionary of English Place-names (4th ed. 1960) accepted Denton's torr+pen+howe etymology (against the 1950s "Tosti" proposal), but notes that torr+penn is not tautological. He expresses the idea of "top or breast of the hill", to which howe was added in a (single) tautology. The most recent published etymology is the '"[r]ocky summit" to which was added "hill-spur"', the three elements of Torpenhow deriving from, Old English torr 'a rock, a rocky outcrop, a rocky peak', Primitive Welsh penn 'head, end, top, height, a hill', and Old English hōh 'a heel; a sharply projecting piece of ground'.

Blennerhasset and Torpenhow is part of the Workington constituency of the UK parliament. The current Member of Parliament is Mark Jenkinson, a member of the Conservative Party. Prior to the 2019 General election, the Labour Party had won the seat in every general election since 1979; the Conservative Party had previously only been elected once in Workington since the Second World War: in the 1976 Workington by-election.

Blennerhasset Mill (at ) is on the south bank of the River Ellen.

All content from Kiddle encyclopedia articles (including the article images and facts) can be freely used under Attribution-ShareAlike license, unless stated otherwise. Cite this article:
Blennerhasset and Torpenhow Facts for Kids. Kiddle Encyclopedia.