Paralithodes platypus, the blue king crab, is a species of North Pacific king crab which lives near St. Matthew Island, the Pribilof Islands, and the Diomede Islands, Alaska, with further populations along the coasts of Japan and Russia. Although blue king crabs are among the largest crabs in the world and reputedly may exceed 18 pounds (8.2 kg) in weight, they are generally smaller than red king crabs.

Commercial blue king crab harvest around the eastern Bering Sea began in the mid-1960s and peaked in 1981 with a catch of 13,228,000 pounds (6,000 t). The Pribilof Island harvest by the United States peaked in 1980 at 10,935,000 lb (4,960 t) and was closed in 1988 due to population decline, then again in 1999 after being opened for three years. The St. Matthew fishery peaked in 1983 with 9,453,500 lb (4,288.0 t) but experienced a similar decline and was closed in 1999. It was opened in 2009, and was featured on the television show Deadliest Catch. The St. Matthew stock is rebuilding but the fishery remains closed, while the Pribilof stock has not drastically improved. Diomede blue king crabs have never been harvested commercially, but support a subsistence fishery for the Native Village of Diomede, Alaska, population 170.

Colder water slows the rate of crab growth and crabs at northern latitudes are often smaller than more southern crabs. Commercial harvest of blue king crabs at the Pribilof Islands is limited to males with a carapace width (CW) over 6.5 in (17 cm) and St. Matthew Island is limited to crabs with CW greater than 5.5 in (14 cm), corresponding to crabs over 4.7 in (12 cm) carapace length (CL). Diomede blue king crabs are similar in size to St. Matthew Island crabs. 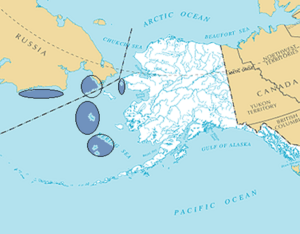 Pribilof Island blue king crabs mate and produce eggs in late March to early May. Females generally brood their eggs externally for 12–14 months. Since blue king crabs need more than a year to brood their eggs, they miss a breeding cycle just before the larvae hatch and only produce eggs every other year, although first-time breeders can often produce eggs in subsequent years. Females release larvae around the middle of April in the Pribilof Islands, while those held at warmer temperatures in the laboratory may release larvae as early as February.

Female blue king crabs in the Pribilof Islands grow to the largest size before they are reproductively mature. About 50% of crabs are mature at 5 in (130 mm) CL. St. Matthew Island females can become sexually mature at 3 in (76 mm) CL and Diomede crabs are similar. Larger female crabs from the Pribilof Islands have the highest fecundity, producing 162,360 eggs or 110,033 larvae per crab. The reduction in fecundity is about 33% between the egg and larval stages. In Japan, an average of 120,000 larvae were released from each blue king crab. Diomede blue king crabs release an average of 60,000 larvae per female.

Environmental variables, such as tides, temperature, salinity, light, phytoplankton blooms, and predation, are seasonally pulsed and likely serve as cues for larval release. Release of larvae over a longer period may serve to give the female a larger window for larvae to correspond with any favorable environmental conditions that may exist, also known as “bet-hedging”. In the laboratory, Pribilof larvae hatch over the course of about one month, and Diomede larvae hatch over the course of 2–3 weeks. These differences may be due to water temperature in the laboratory, which has a clear effect on embryonic and larval development, and is probably slightly different from hatch timing in a natural environment.

All content from Kiddle encyclopedia articles (including the article images and facts) can be freely used under Attribution-ShareAlike license, unless stated otherwise. Cite this article:
Blue king crab Facts for Kids. Kiddle Encyclopedia.