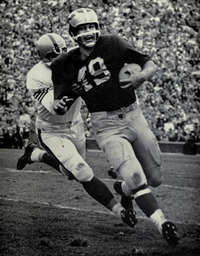 Robert James "Bob" Ptacek, Jr. (born April 23, 1937) is a former professional American and Canadian football player. He was born in Cleveland, Ohio. He holds the CFL record for most fumble returns in a playoff season with three in 1963.

Ptacek played college football at the halfback and quarterback positions for the University of Michigan from 1956 to 1958. He later played professional football in the National Football League (NFL) for the Cleveland Browns in 1959 and in the Canadian Football League (CFL) for the Saskatchewan Roughriders from 1960 to 1965.

All content from Kiddle encyclopedia articles (including the article images and facts) can be freely used under Attribution-ShareAlike license, unless stated otherwise. Cite this article:
Bob Ptacek Facts for Kids. Kiddle Encyclopedia.