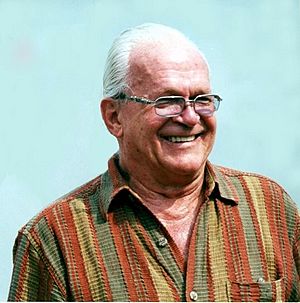 Robert Castle Schoen (February 1, 1934 – January 26, 2020), better known as Bob Shane, was an American singer and guitarist. He was a founding member of The Kingston Trio. As a member of this group, he became a important person in the rebirth of folk and other acoustic music as a popular art form in the U.S. in the late 1950s through the mid-1960s. He won two Grammy Awards with The Kingston Trio.

Shane was born in Hilo, Hawaii. He was married Louise Brandon for 23 years. The couple had five children. From 2000 until his death in 2020, Shane was married to Bobbie Childress.

Shane died on January 26, 2020 in Phoenix, Arizona of pneumonia-related problems. He was 85.

All content from Kiddle encyclopedia articles (including the article images and facts) can be freely used under Attribution-ShareAlike license, unless stated otherwise. Cite this article:
Bob Shane Facts for Kids. Kiddle Encyclopedia.